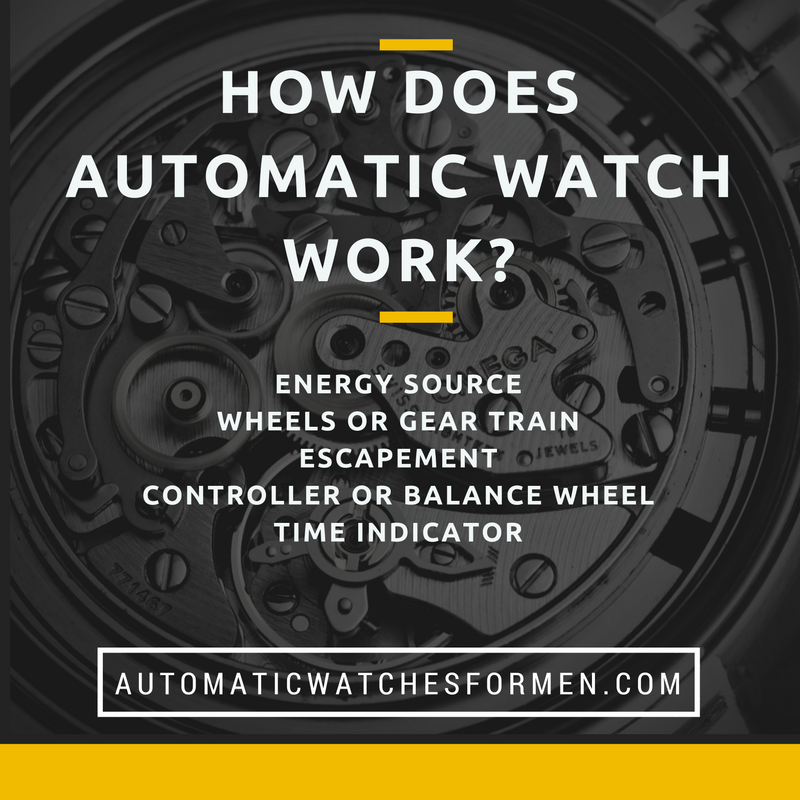 It is not a secret that automatic watches are very pricey, compared to other types of watches such as quartz, digital etc. One main reasons for this high price is coming from how the automatic watch works and made off.

Automatic watch is very different than the normal battery or quartz watch. It does not run on battery or electricity but depends solely on mechanical parts for its timekeeping.

So how cool is that? Very!

Let’s check out further on this special type of watches and learn how exactly does it works.

What Is An Automatic Watch?

As defined in my previous post, automatic watch is a mechanical watch with self winding capability. The watch movement is the heart of these watches.

It is the mechanism that moves the watch and ensure the timekeeping as opposed to the quartz vibrations in a quartz watch.

And yes, these movements will cost a lot more than just your average Casio quartz watch due to its minuscule parts and workmanship required.

The back of the automatic watch movement of the Seiko SARB033 can be seen from the photo above. It is an automatic watch (notice the semi-circular rotor) which can also be wind by rotating the crown.

Difference Of Automatic And Mechanical Movements

The watch movement is powered by a mainspring that stores potential energy as opposed to electrical power in quartz watch. To run the watch, the spring will unwound itself while moving the gear train that it’s attached to.

This mainspring needs to be winded to store its energy. A typical power reserve for the movement is about 38 hours (though most watches have more like the Swatch Sistem51 with 80 hours power reserve).

The difference between a mechanical movement and automatic movement is the mechanical will need to be wind manually whereas an automatic watch movement has a weighted semicircular rotor that will self wind the mainspring.

The rotor inside the watch will freely rotate when the watch is used because of the hand movement of the wearer.

This is the only main difference between automatic and mechanical watch movements – the self winding capability.

It is truly convenient that you don’t have to wind it everyday like those from the early times. This removes the inconvenience and make the automatic watch on par with quartz watches in terms of usability and convenience.

But the mechanical watch movement also has its advantages that is not well known to most people. It significantly thinner than the automatic movement because it does not has a rotor.

It also uses less parts, so it is cheaper and requires less servicing than an automatic movement. But its quite sad that most watch manufacturers now uses automatic watch.

I personally feel that automatic self winding is not that great as a manual wind is very easy to do actually. It won’t even take more than 10 seconds to wind a watch manually.

With a mechanical movement, we can have a thinner and most importantly a much cheaper watch. But alas, it seems that a watch that requires manual winding everyday will not really attract much attention except for some people (like me lol!).

Swatch Sistem51 is an revolutionary automatic watch that only has 51 parts compared to the typical 100+ parts of any normal automatic watch. The watch’s designer uses the basics of the 5 components to simplify the movement until it can be assembled by a robot!

How Does Automatic Watch Work?

Now for the technical part, how actually does automatic watch work? Well, the mechanism of an automatic watch movement (or any mechanical watch – wrist watch, pocket watch etc) can be broken down into 5 major components:

Now let’s go into the detail of each of these components!

Anything that moves need energy. A basic law of physics states that energy cannot be destroyed but can only be converted from one form to another.

The same goes for our automatic/mechanical watch movement. In order for the movement to work, potential energy stored in the mainspring will be transferred to the other components of the watch.

Mainspring is a long striped of steel. It is rolled tightly inside a case called barrel. The spring will try to straighten itself which will turn our watch movement. But how does one tighten the mainspring?

There are two ways to tighten it. One is by rotating the crown which is connected to gears that will tighten the mainspring.

The other one is by a rotor which is basically an eccentric weight that will rotate due to arm’s movement. This is the main feature found in automatic watch.

The rotation of the rotor will then tighten the mainspring. Most automatic watches have both options while mechanical watch has only the crown tightening method.

The energy stored in the mainspring is transferred to the rest of the watch through a set of wheels or gear train. For those that didn’t know, gears are a set of wheels that is connected through teeth-shaft interface.

Because of this, one full revolution of the shaft (on another wheel) will cause only a small rotation on the teeth connected by it.

By using gears, a small amount of energy from the mainspring barrel (defined by how many times it can rotate) can be used to create a lot of rotations in the wheels that control the second, minute and hour hands. This is one of the important aspect to make a watch has higher power reserve.

A watch movement diagram. It is the same as the first picture above but shows how the components will be positioned to fit a circular watch. Notice how the wheels are stacked above each other to ensure all of them can be crammed into a small watch.

Escapement is responsible to stop the wheels from spinning freely and out of control. Escapement, and the Controller or Balance Wheel are responsible to maintain the constant rate of rotation of the wheels which in turn will directly affect the accuracy of the watch.

It can be said to act as a brake to control the movement of the whole watch’s gear train.

The forked lever has a pellet jewel on the contact point with the escape wheel. A jewel material is used to reduce friction and improve longevity of the pallet.

The forked lever movement is controlled by an impulse pin. The impulse pin will swing side to side following the movement of the balance wheel that it is connected to.

This will moves the impulse pin which hit the forked lever and subsequently releases the escape wheel.

The hairspring is considered one of the most important part in a watch movement as it will absorb and release and equal amount of force at a regular interval. A slight difference will make the watch behave erratically and inaccurate.

The balance wheel oscillates at a very high speed. The vibrations per hour or beats per second is used to track how fast it oscillates.

One beat is defined as one swing of the balance wheel or the impulse pin hit the forked lever once. Typically most watches now have 6 or 8 beats per second.

A higher beat is better as it means the balance wheel is oscillating at a high speed and not really affected by wrist’s movement.

A higher beat will also make the second hand move smoother because the wheel is moving at a finer steps.

The balance wheel, impulse pin, forked lever and escape wheel are the main components which control the accuracy of a watch.

The sound of impulse pin hitting the forked lever and lock and unlock sequence of escape wheel are what give an automatic/mechanical watch movement the characteristic tick-tick sound.

Last but not least, the time indicator. Hands are connected to the wheels that correspond to the time measurement intended.

For example, second hand is connected to a wheel that rotates once in a minute. Minute and hour hand can be connected to other wheels that will rotate at 60 times and 1 time per hour.

I can imagine it will be very hard to understand all of these. Because of that, I’ve attached two excellent videos that will show you in detail how a watch works.

A video showing the parts of a simple mechanical watch

Great video by Hamilton on the basics of a watch movement. I highly recommend for you to watch this video. Even though the quality is a bit bad, it truly explains the basics and the reasoning of why we need all the 5 components in a mechanical/automatic watch.

The mechanism of how an automatic or mechanical watch movement work is quite simple. The 5 components that I’ve explained above are fairly normal for all modern watches though you can guess that any added complications (such as day, date, chronograph, moon phase etc.) will add more components and it won’t be as simple as the watch movement diagram shown above.

A very important thing to know is these components are in a very small size in order to fit into that wrist watch. It takes a very high precision to manufacture those parts, and to assemble it into the finished movement.

For me, this is one aspect that gives the beauty of an automatic watch and why I fell in love with it a few years ago.

I hope my little post can provide some knowledge to you about automatic watch movement. Feel free to put your comments or feedback in the comments section below.

5 thoughts on “How Does Automatic Watch Work?”