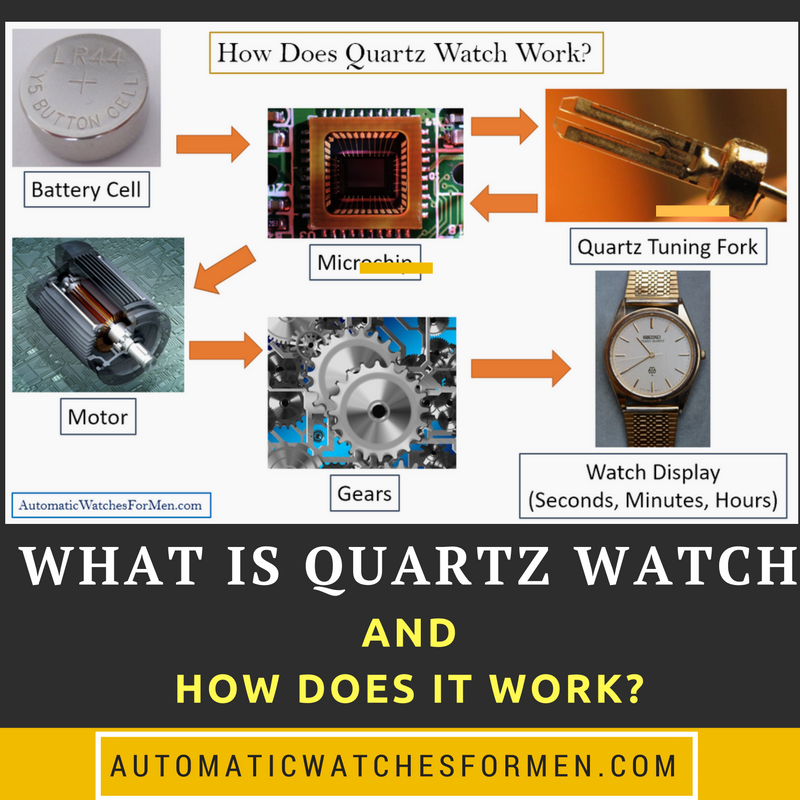 Quartz is the second most abundant mineral in Earth’s crust (or the ground as we know it). It’s basically sand with a scientific compound name called silicon dioxide. It’s made up of the chemical element Silicon and oxygen. These elements are very abundant on earth and explains why quartz is very common. The name is derived from German word “Quarz” meaning “hard”, unsurprising because quartz is hard and usually found near rock deposits.

It’s usually colorless but can also be found in many color varieties. In fact, the gemstone amethyst is one of its varieties but with a beautiful purple shade. One of the properties of this mineral is piezoelectric. Piezoelectric means the mineral can generate electric current if applied stress. A great thing about quartz is that it’s also have a reverse piezoelectric property – it will moves or oscillates if supplied with electrical current. This unique property, combined with how abundant and cheap it is make quartz the perfect choice to be used as timekeeping device in watches.

A purple amethyst – a type of quartz. Beautiful isn’t it?

What Is Quartz Watch Then?

What is quartz watch? Simply put, quartz watch is a watch that uses quartz as its main timekeeping device. As I’ve explained in my previous article about how automatic watch work (you can read it here), watches need a way to track time. As long as the watch can track and count 1 second, the others such as minutes, hours and days can be figured out by gears (for analog watch) or digital counters (in digital watch). After all, 60 second equals to 1 minute, and so on so forth. But the main thing that a watch has to solve is how to know that 1 second.

The pendulum clock uses the movement of pendulum for this while automatic watches use balance wheel and escapement assembly to keep track of time. By adjusting the balance wheel so that it will oscillates 8 times in one second, the escapement and gears can then work out to move the seconds hand along “1 second” on the watch. Its all good but human are never satisfied.

Automatic watches need to be wound regularly and it does not track the perfect time – it will lose or gain some seconds (up to 30 seconds) a day. Even a COSC Chronometer watch will have at most +-6 seconds per day accuracy. This is not acceptable to the scientific community that relies on precise time keeping for their laboratory usage. They also need a watch that will run with little effort, something that is run by electricity for example.

And thus the search for new time keeping device started. Steel has been used but found not very good for this purpose. Around early 1920s, quartz was discovered to be perfect to be used in a watch – piezoelectric properties, abundant (not a rare mineral making it cheap to be used), need less equipment and better temperature stability. It’s also will not be affected by its position, automatic wheel balance tend to behave differently at different positions (face down, face vertical etc.) due to gravity.

An example of one of the earliest quartz clock. I can’t imagine having this in my house lol.

Quartz Wristwatch Invented By Seiko In 1969

Like any new technology, quartz watch started to be very big (see picture above of one of the earliest quartz watch). That thing is fine to be used in laboratories but not for public use. Finally in 1969, Seiko succeeded in producing the first quartz wristwatch (though I have to note here that the Swiss also invented the same thing, just a few months later).

By reducing the size of the digital logic semiconductor (responsible for counting the vibration of the quartz crystal and sending signal to move the watch), size of quartz crystal, battery and others, Seiko managed to do squeeze all of the quartz watch movement into a small wristwatch. Their first quartz watch is called Seiko Astron and was very expensive at that time. But through innovation, mass production and cheaper semiconductors, quartz watch become cheaper. It became very popular and embraced by all over the world. For the first time, normal people can buy and use a wristwatch which is normally reserved for those well off only.

Above is a simplified diagram of a quartz watch. The best part is these components are much smaller than their automatic watch counterpart, making quartz watch relatively slimmer

How Does Quartz Watch Work?

So how does quartz watch work then? It starts from a battery cell. The cell provides electric current to power a microchip which subsequently send some current to a quartz, making it oscillates/vibrates. This quartz crystal is normally cut into a tuning fork shape as this shape is found to be the best in terms of consistent oscillation. The oscillation is picked up by the microchip.

The original frequency of oscillation is normally 32768 Hz (or 32768 times in one second). This frequency is used as it is high enough that people can’t hear it and low enough so that an inexpensive microchip can use it to derive 1 second – this is done by dividing 32768 by 2 fifteen (15) times. The microchip will then send electric current to a motor once per second. This motor will then moves the watch display hands by using gears. For a digital watch, the microchip will do the conversion itself.

An image of the inside of a Seiko’s quartz watch

The best advantage of quartz watch is its accuracy. Most normal quartz watch has +-10 seconds per month accuracy, much better than an automatic that will gain/lose that much in a day. This is due to many factors. For start, quartz watch timekeeping is based on the quartz mineral properties and microchip – both of which is almost perfect even if mass produced. Automatic watches on the other hand is mechanical based with many gears and balance wheel springs, these are stuffs that are not perfect no matter how detail the construction it.

Another great thing about quartz watch is it’s not very sensitive to impact and temperature changes. As long as the construction of the watch is solid, nothing can destroy the movement. This is totally opposite of automatic watches that have delicate balance wheel pivot which is very prone to impact damage. It’s also easy to lose accuracy due to temperature drops.

So what’s next for it? For a start, watch manufacturers try to find ways to improve upon the accuracy. +-10 seconds per month is still not good for them. A few years back, Bulova succeeded in developing its Precisionist movement. What’s so special about it?

Bulova Precisionist is a innovation to the quartz technology with its very high frequency movement (262144 Hz), it’s sweeping seconds hand and super accuracy – all achieved with a normal watch battery life

First, this movement has a frequency of 262144 Hz (or 262 kHz) which is 8 times the frequency of normal quartz. Bulova uses a 3 prong quartz oscillator for this, which incidentally increases its accuracy to about +-10 seconds per YEAR. That’s a huge improvement over normal quartz. Remember also that quartz watch has the tick-tock motion – this is done to preserve its battery. Bulova has made the Precisionist able to generate a sweeping seconds hand motion, while also keeping its battery life at the normal 2-4 years mark. Now that’s a huge achievement! (I’ve reviewed the Bulova Precisionist watch which you can read here)

Citizen Eco-Drive Perpetual Chronograph shown above can keep time synchorize to atomic clock every night via radio signal. Combined with Citizen’s Eco-Drive Solar powered movement, this is a watch that’s very accurate and can run undisturbed for its whole lifetime

Other watch brands also has their own innovation. Citizen for instance has developed the Eco-Drive movement to turn the whole watch dial face into a solar panel. This makes the watch basically does not need any battery change. A watch that I’m fascinated at is the Citizen Eco-Drive Perpetual Chronograph which in addition to having a solar panel also will automatically synchronized with atomic clock every night. That means this watch is totally accurate in the span of its lifetime!

Another great watch is the Seiko Astron. Not to be mistaken with the first generation quartz watch, this is a new version of quartz by the legendary watch brand. It is also a solar watch and can link to GPS satellites to synchronize time anywhere in the world. The advancement of quartz watches will never stop. As our technology improves, so does our watches too and I’m truly excited for what’s to come =)
p/s: Even though quartz watch has many advantages, I’m still leaning pretty heavily towards automatic watches. As stated in my article on comparison of automatic vs quartz watch<<<LINKKKK, I find automatic watch to be unique and have lots of character. Besides, I enjoy the fact that the watch I use is very different than most other common quartz watches other people use =P

2 thoughts on “What Is Quartz Watch And How Does It Work?”