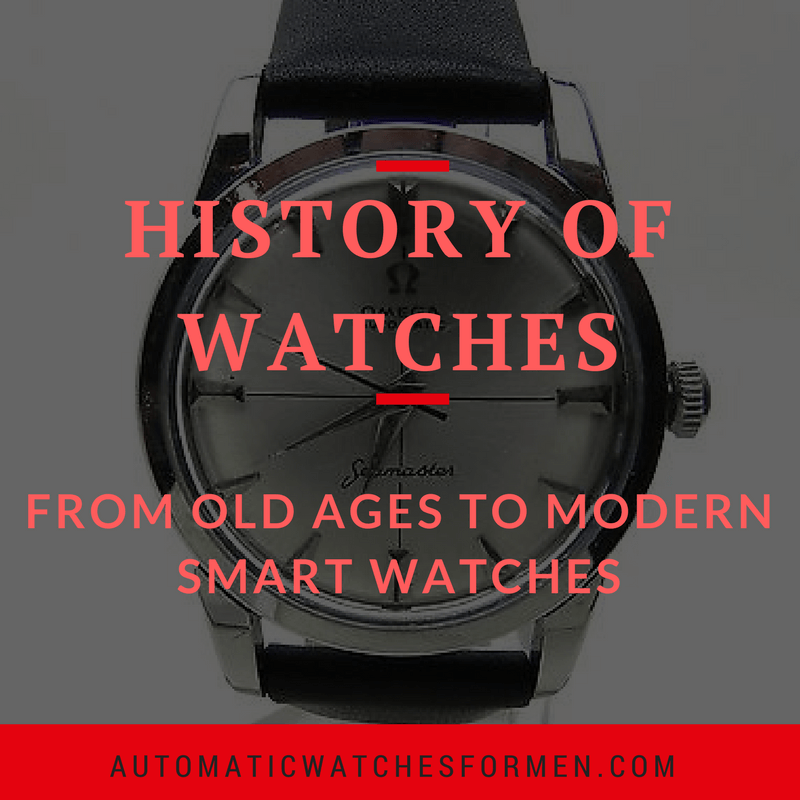 Have you ever wonder what’s the history of watches? Watches are used to tell time, something that is so important to all people until there is a proverb that says “Time is gold”. How true is that!

People said that time is precious, important and valuable, so we people need to make most of our time here on earth. It is part of our daily routine, whether you are going to work or buying your grocery in the nearest super market.

So now, how can you tell time? Well it is no brainer that people nowadays have wristwatches and digital clock apps installed to their mobile phones. However, it is still fun to look back on how our ancestor measure their time. So let’s look at the history of watches from the early days to the current digital era.

Our ancestors have different ways of measuring time, these are the sun dial, the water clock and the hour glass. Sun dials are invented by prehistoric man when they discovered that a structure or any thin rod changes its shadows. Later on they build a round disk and put markings just like the forerunner of our clock today and that is how they can tell time.

Another form of measuring time was introduced by the Greeks and it is called clepsydra or water clock which dates back 1500 BC. Normally this clocks measured time based how much water flows inside a marked container.

Perhaps the most well known device to measuring time from the yesteryear is the hourglass or also known as sand timers. It was developed in ancient Egypt around 150 BC. These mechanical device is made up of two bulbs attach together vertically by a narrow neck which allows the sand to flow from the upper bulb to the lower bulb.

The famous hourglass. It’s not being used in this age but it’s still a popular item for decorations which is why I believed it’s the most popular among the ancient watches

Normally a sand timers range between two minutes to sixty minutes depends, on the size and the amount of sand inside those bulbs.

When Was First Wristwatch Invented?

Now that we all know how prehistoric people measures time. Those devices work find but is not the most efficient way. Sundials cannot be used in the night or during cloudy/rainy days. Water clock will run out of water and not easy to build. Hour glass need to be constantly turned upside down.

Which was why modern men need to figure out how measure time more effectively, hence the creation of modern watch. The development of modern watch evolved from spring driven clock which appeared in Europe in the late 15th century. Those watches are larger compared to once we have today. These are grandfather clocks which was built with precision and craftsmanship.

The first mechanical wristwatch was made by a Swiss watch manufacturer Peter Philippe in 1868 for Countess Koscowicz of Hungary. It was never been popular back then for men to wear wristwatch for they see it as a decorative piece of jewellery for women. However as it progress, men see its practicality of wearing wristwatches for they can easily monitor time compared of pocket watches.

These then was widely used among military men who need to time their actions precisely during battles. And soon after, public catches on to this new invention.

The manual watches are the old type and very traditional type of watches that needs to be manually wound by hand to create the power needed by the watch mainspring.

The automatic watches on the other hand is not as bit as automatic that we are more accustomed to understand nowadays. Today, automatic would imply anything with electronic stuffs that do things on their own.

An automatic watch movement is simply “self-winding”, that is powered by the natural motion of the wearer’s wrist. It relieves the owner of the watch the burden of having to manually wind it everyday – thus the automatic name.

(For more in-depth explanation on how automatic and mechanical watch works, read my article here).

Among the biggest brand of automatic watches are Seiko, Tag Heuer, Tudor Pelagos and Rolex watches. These watches would range from a tag price of $100 up to $10,000. It’s quite expensive right since we can always buy a very cheap $10 watch off Amazon or Ebay.

But what you pay is what you get and you are paying premium price for an exquisite item with mechanical heritage.

The automatic and mechanical watches are great devices, but they lack accuracy – it can gain or lose up to 30 seconds in a day. For well maintained watches, it could be a few minutes late/fast. Add these for a 30 days month and you are looking at at least 15 minutes of inaccuracy. A year? That’s how bad the problem of mechanical watches is.

Scientists try to find a way of timekeeping that is more accurate. It was the year 1927 when the first Quartz clock was invented by Warren Marrison and J.W. Horton, but did not became popular at that time, however the year 1969 when Quartz wrist watch became well known.

Quartz movement is an upgrade to automatic watches. The timekeeping is controlled by the very fast vibrations of quartz crystal. This is then counted by electronic circuit inside the watch, producing an accurate and reliable watch. (See this detailed explanation of quartz movement and how it works).

It’s seems there is a quite boom of Quartz movement in the past decades because it is very cheap and doesn’t need a lot of maintenance compare to an expensive automatic watch.

Screen grab from Amazon on quartz wrist watches. If the selling price is just around $10, I wonder how cheap it costs to make it? Mass production and automation in manufacturing has really brought wonders to us. In comparison, a more complex automatic watch can be had for more than $100.

Some of the most popular brands of these type of watches is Seiko, a Japanese company that manufactures and sell watches. The company have become very successful in producing battery powered watches, and to be honest they become a household name.

Now the question is with the popularity of Quartz watches, does it hurts the luxury automatic watches? Well there is a declining of Swiss watch exports and sales according to the recent surveys. Now let’s face it with the current global economy and most people are in a low budget, of course they will prefer the cheaper ones.

However, nothing will beat a well crafted automatic watch, which traditionally you can pass it to your loves ones. For me, I really love automatic watches in the sense it has that mechanical movements and unlike all out electronic appliances nowadays (smartphones, laptops, etc.). Besides, it’s fairly unique and you won’t find them being worn much by people =)

(For in-depth comparison of automatic/mechanical vs quartz watches, read my article here)

Smart Watch – The Future Of Watch?

Since were done discussing automatic to quartz powered watches. We will come now to the latest trend. Welcome to the digital world, where an analog signal is being converted to binary digits to digital as a different format. You have mp3’s, HD television, even photography are digital nowadays. So were not surprise that they will develop a digital watch right?

The answer is the Smart watch, welcome to the future of watch. For the past years we saw the fast booming of smart watch from the basic ones that can tell time beyond time keeping to the latest brand that can perform like a mobile phone. Well technically you can synchronize smart watch to our mobile phones.

Smart watches surpassed both automatic and quartz watches in terms of functionality and computing mechanism. Popular brands and manufacturers of smart watches are Samsung, Apple, Sony and Huawei. Their watches provide the best functionality, have Bluetooth connectivity, GPS, voice recognition, and full of mobile phone compatibility.

Even though we need to charge it regularly, will likely to be obsolete in a year, expensive and prone to damage – I gotta admit that smartwatches do have that cool factor in them. Now if only they are much cheaper.. hmmm

Now with all of these benefits there is also a downside on having a smart watch. Some of these downside is that it is battery powered and you need to charge it once in a few days. Secondly, since smart watch are like mobile phone are run in an operating system, it can be buggy and you need to update it.

In my opinion, traditional watches (either quartz or automatics) are more cost beneficial than these smart watch gadgets =P

Whether you’re an avid watch collector, a hipsters trying to go to the latest trend or a history buff who wants to own the most historically expensive watch, we all agree that time is important and having a device or watch to monitor our time is a must. Time is gold, and we must really use it to our benefit.

In my opinion, automatic, quartz and smartwatches are just devices to tell time. It is how we use the information from these devices that matters in the end.

Hope you guys enjoy this history lesson of watches and wristwatches. Drop your comments or questions on the section below. Don’t forget to subscribe to my blog so that you can be notified of the future exciting stuffs. Share this article on social media if you love it. Till next time then.