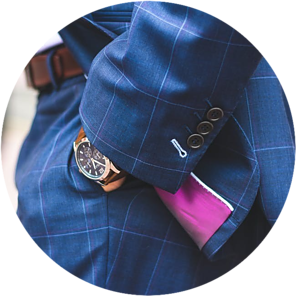 It’s been a few years since I first bought my automatic watch. Initially, I was intrigued by this type of watch that is interesting and not like other watches – especially about how it can work without needing a battery.

Does an automatic watch has a battery? Automatic watch does not require a battery because it’s powered by natural wrist motions of the wearer through the potential energy stored inside it’s mainspring.

Knowing the characteristics of the watch is very important when you’re choosing a new watch to buy. While automatic watch does not require a battery, its power reserve is also quite limited. In addition, there’s also the issue of choosing between automatic and mechanical watch movement which will depend on your preference and use pattern.

How Automatic Watch Works Without Battery?

Instead of battery, automatic watch is run by the natural wrist motions when it is being worn, which will supply energy to the mainspring. It is this mainspring that will eventually run the whole watch movement.

How does the mainspring run the watch?

This kinetic energy will then be transferred throughout the whole watch movement, from the gears to the balance wheel and lastly to the time display.

But how does the mainspring is tightened?

In all automatic watch, there’s a weighted rotor in semi-circular shape (which you can see from the any watch with glass transparent case back) that will rotate whenever you’re wearing or shaking the watch.

(if you’re interested to know more about how automatic watch works, read my previous in-depth article about this topic here)

The amount of potential energy that the mainspring can store is limited and this will determine how long the watch can stay ticking before it needs to be wind (or so called the watch’s power reserve).

How Long Can An Automatic Watch Power Reserve Lasts?

The amount of potential energy that the mainspring can hold (or the power reserve) varies depending on the watch movement design and the material used for the mainspring.

In general, most automatic watch have power reserve between 38 hours to 50 hours. There’s also some special watches that has a huge 7 days of power reserve!

Below is the list of power reserve for some of the more popular automatic watch movements.

How To Keep The Power Reserve Full? Do I Need To Always Wear My Automatic Watch?

There are a few ways to keep the power reserve always full. Wearing the watch every day is the first way that comes to mind. By wearing your automatic watch, you will be able to keep its power reserve continuously added, provided that your wrist movement is adequate.

But in general, wearing your watch 8-9 hours every day will do the trick and prevent from your watch stopping due to depleted power reserve.

Another way that you can keep your power reserve full is by manual winding the watch. Simply take the crown and rotate it. You must be able to hear a faint grinding gear sound – that means the manual winding is in progress and you’re directly tightening the mainspring.

This method is far more efficient that relying on the weighted rotor as 40-50 rotations of the crown is enough to fully tightened the mainspring. With the automatic self-winding, you will need about 700-800 rotations.

But do be careful on manual winding as doing it too much can be detrimental to the health of the automatic movement.

On thing to keep in mind is that manual winding capability might not be available on some automatic watches. For example, the ever popular Seiko SKX007 dive watch uses the 7S26 automatic movement that cannot be manual wound.

Granted, that movement is an old and legacy movement (newer Seiko movements all can be manual wound) but you should always check if the watch that you want have this feature or not prior to buying it.

The last way to keep your automatic watch power reserve full is by using a watch winder.

Watch winder is a simple device that seeks to mimic our wrist movement. By putting the watch in the winder, the winder will then rotates the watch so that the weighted rotor inside it will move and thus topping up the power reserve.

It’s an easy way to wind your watch without having to manually wind the crown.

I recommend to not skimp on this watch winder as a cheaper one will use a cheap motor that can go bad in just a few months. Not to mention cheaper winders might not be properly designed and can magnetize your watch (which is a common issue affecting automatic watch. Read my article here to know more about problems with automatic watch).

Automatic vs Mechanical Movement – Difference That You Should Know

Sometimes used interchangeably, automatic and mechanical movements actually have a lot of differences. I seriously think that knowing these differences are very important that you should know prior if you’re thinking of buying one of these watches.

The first thing to know is mechanical movement does not have self-winding capabilities; which means it does not have the weighted rotor that can wind the watch simply by wearing it.

Instead, mechanical movement rely on manual winding; that is you will need to rotate the crown (or the knob usually at the right side of the watch case) to tightened the mainspring – just like playing a simple toy that you need to turn the spring to play.

Although mechanical movement is not as easy to use as the automatic movement (you will need to wind your mechanical watch everyday prior to use), it does have its own advantages.

For a start, mechanical movement is cheaper as it’s easier to be built. In addition to that, the watch is lighter and have a slimmer profile because it does not have to house the weighted rotor mechanism. Not only that, mechanical watch typically is cheaper to be serviced because of its simpler movement architecture.

Generally, I would recommend the automatic movement because its fairly easy to use, especially to those new to these watches.

But if you want a more traditional experience of hand/manual winding your watch (plus getting a cheaper, slimmer & lighter watch), then you can go for the mechanical movement.

Solar watch can recharge its battery by being exposed to light while for kinetic watch, you can charge it by wearing and using it. Smartwatch works just like a phone whereby you can only charge it by connecting a power supply.

3 thoughts on “How Can Automatic Watch Work Without Battery?”