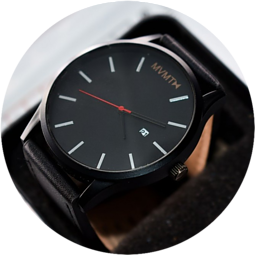 Quartz watch is the most widely used watch type on the planet. It’s also very accurate and very rarely, its time needs to be reset.

The quartz crystal plays a huge role in the accuracy of the watch. In addition, quartz watch also comes in different quality with the highest (and most expensive) quartz watch is much more accurate than the typical quartz watch that you can buy off the street. Lastly, you will see why quartz watch is the most common watch all over the world currently.

Quartz Crystal – The Reason Why Quartz Watch Is Very Accurate

The reason why quartz watch is so accurate lies in the quartz crystal itself. Quartz is a mineral with the formula of SiO2 and is very abundant around us (such as in sands, rocks, etc.). The quartz used in a watch is very tiny, at about 4 mm long in the shape of a two-prong fork.

So what does this quartz crystal do? How does quartz watch work?

In general, a watch has 3 main elements: power supply, timekeeping and moving gears. Inside a quartz watch, the power is supplied by a battery cell in the form of electricity.

This electricity is then channeled to the quartz crystal (or called oscillator) via a microchip, which forms the timekeeping mechanism. As the electric hits the quartz crystal, the crystal will then vibrate profusely, at about 32,768 Hz (or 32,768 times per second).

The microchip counts this vibration and uses it to determine one second simply by dividing the number of vibrations by 2 for 15 times (because 2 to the power of 15 is 32,768).

From then, the microchip can transmit one signal per second to an electric motor to move the watch’s moving train (gears) and then display the time.

(If you’re interested, you can read my previous post on how quartz watch works to understand it better)

This mechanism is the basis of all modern watches (either solar, kinetic, or even smartwatches) found today. It differs greatly than the movement mechanism that is found in an automatic watch.

How Accurate Is Quartz Watch?

So how accurate is a quartz watch? Quartz watch generally have an accuracy of around +- 10 seconds per MONTH. Even the most accurate automatic watch with COSC certification pales in comparison as it will have a much worse accuracy at +-6 seconds per DAY.

Now that means quartz watch is about 18 times more accurate that an automatic watch!

At that high frequency, any discrepancy and slight blimp in the signal will only constitutes a marginal fraction of the whole vibration. In other words, even if the vibration is off by a 10 times in a second, that means it have a deviation of about (10)/32768 or 0.03% per second. This helps to minimize its deviation and increases its accuracy.

With an automatic watch, even a slight off in the vibration will cause a higher percentage difference. Scientists have used the same concept to produce a much higher accuracy in a watch by increasing the frequency of the timekeeping oscillator.

With such a high accuracy found in the quartz watch, that’s the reason why we never seem to have to set our quartz watches even if we’ve worn it for many months. In a particular year, a quartz watch might have a maximum of only 2 minutes of deviation!

Although this is already remarkable, watchmakers never stop trying to innovate and produce a higher level of quartz watch with higher accuracy.

For instance, Bulova produced their Precisionist movement that has an accuracy of +-10 seconds per YEAR. Yes, you read that right – only 10 seconds per year. They managed to achieve this by using a revolutionary three-prong quartz crystal shape, further increasing the oscillation o 262 kHz. (You can read my review of the Bulova Precisionist here for more information).

Why Is Quartz Used In Watches?

Why is quartz used in watches? The reason why quartz is used widely in watches lies with its piezoelectric properties.

Piezoelectric means that a quartz material can will vibrate when supplied with electricity, and vice versa. This makes it possible to use quartz as an oscillator for timekeeping purposes.

Not only that, quartz crystal also have a remarkable property with this vibration is being very precise and constant between various quartz samples. This makes it very easy to reproduce the same watch using quartz crystals as its basis.

Another reason why quartz is used in watch is due to its abundance and affordability. Quartz is basically everywhere around us (it’s in the sand, rocks, soil, etc.) which means that it’s very cheap to procure. Not only that, you will only need a very small size of quartz crystal in a watch (about 4 mm in length) so there’s really no issue with cost for quartz.

In comparison, an automatic watch will need many steel materials for it to be made. Some higher end watchmakers even go as far as creating their own alloys to further their watch’s accuracy and durability.

These unique properties and its affordability are the reasons why quartz mineral is the best mineral for watches.

For Accuracy And Affordability, Quartz Watch Is Simply The Best Choice

If you ask me which is better between automatic and quartz watches, I would say that quartz watch is simply the better watch technical wise and affordability wise.

It has very high accuracy (even for the basic average quartz movement) which really is leaps and bounds above the accuracy found in even the most accurate automatic watch.

Quartz watch is also more affordable than an automatic watch.

I mean, you can even get one from amazon or alibaba for just 10 bucks! With an automatic watch, you’re looking at above than at least $100 – and that will only get you a low-quality automatic watch.

If you look at any kids wearing a watch, I can bet that they are wearing a quartz watch. This is unthinkable just half a century back as the only watch available back then was automatic watch and only the most well-to-do people can afford it.

Truthfully, quartz watch has made watches affordable and accessible to every one.

But if you’re asking me which one is my personal preference, I’d choose automatic watch for its unique characteristics – I’ve written an entire post on the differences between automatic and quartz watch. Read the article if you want to know more about both watches pros and cons.

Do quartz watches need batteries? Quartz watch needs battery to supply electricity for it to work. The electricity will be used to power the microchip, quartz crystal oscillator and the electric motor inside the watch.

What’s the most accurate watch? The most accurate watch in existence is the atomic watch. It uses atomic theory to determine timekeeping way more precise (around 1 second deviation per 300 years!) than what a wrist watch is able to give. There exist a type of watch that can automatically sync with the known atomic clock every night, thus making it as accurate as an atomic clock.

What’s the most accurate quartz watch? The title of the most accurate wrist watch currently goes to the Citizen Caliber 0100 with an accuracy of +-1 second per YEAR. It have a special quartz watch oscillator that is cut in AT cut shape (flat shape) that vibrates at a much higher 8 MHz as compared to the typical 32 kHz vibration in normal quartz watch. Check out this video to understand how Citizen managed to achieve this amazing feat.