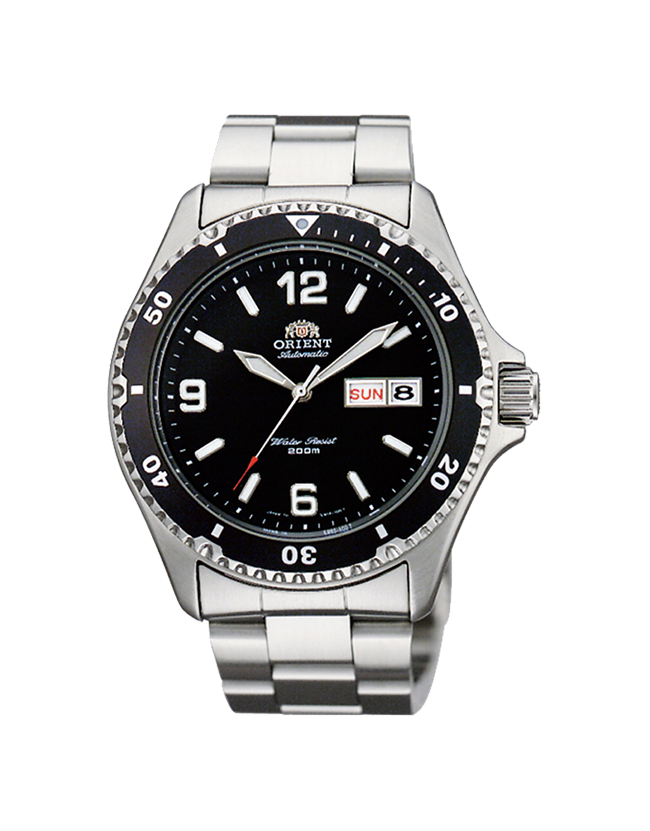 With the Orient Mako, watch enthusiasts worldwide are the ones that benefited the most as there is an alternative to the Seiko SKX007 & SKX009 in the budget diving watch section.

The Mako was, and still is beloved due to its beautiful and balanced design.

But some people are not too happy with it due to many issues such as outdated movement, extra pusher for date change (which add one more critical area for water ingress), and the less than satisfactory mineral crystal.

Orient then released the new Mako 2 as a response to those comments (or wishlists from fans lol..). Let’s take a look at the Mako 2 and how it fares up against its older brother.

Update: I’ve recently featured the Orient Mako 2 in my list of the top 10 automatic watches under $200. You guys can check the article HERE.

Water Resistance: 200 m or 660 feet
Other Features: Screwed down crown, Day and date display, Lume on markers and hands

Orient chooses to keep the design of the Mako 2 just like the original Mako. The dial or watch face actually is the same. Orient knows the looks of the Mako is well loved by fans and I really agree with their decision to keep it like that.

The only difference (and a major one) is the absence of the pusher at 2 o’clock in the original Mako. Due to the upgraded Orient Caliber F6922, all day/date/time change is controlled by the crown.

This is a very welcomed improvement by many Mako fans. A dedicated pusher to change day indicator is very outdated and no brands are doing that anymore.

Not to mention the pusher is a critical area for water ingress thus eliminating it will reduce the chances water get into the Mako 2 while underwater. But in my opinion, the pusher actually makes the Mako looks unique as without it the watch will just look like any ordinary diver watch…

The hands of the Mako 2 uses the same design as the Mako that is sword shaped hands. Mako 2 also has the exact same marker design that is the numeral markers at 6, 9 and 12 o’clock and index markers elsewhere.

These type of markers are usually referred to as “explorer markers” due to the similarity with Rolex Explorer, the watch that popularized this marker design.

The bezel are unidirectional diving bezel with minute markings on it. Orient improved the bezel by giving it 120-clicks versus the 60-clicks on the original Mako. This gives it a more expensive feeling while using the bezel.

One thing that Orient don’t improve is the dial window crystal. The Mako 2 still uses mineral crystal which is a scratch magnet. Well, I don’t think Orient can do much about this part.

It’s very difficult to give a much higher quality sapphire crystal while maintaining the low price of the Mako 2. My only advice is to ensure you guys don’t overuse the Mako 2 unless you want the dial window full of scratches =P

2 Versions To Choose From: Matte Black And Sunburst Blue

There are two dial variations of the Mako 2 that Orient releases: matte black and sunburst blue dials. These two versions also comes with matching bezel color. The black dial looks very cool and elegant while the sunburst blue dial is very beautiful and it’s very hard to take your eyes of it.

Want an elegant and understated wrist watch? Go for the black dial. Want something that will attract attention? The blue dial will do the job.

Perhaps Orient want to cut some cost as probably they know these versions are not as popular as the black and blue versions.

The stainless steel case of the Mako 2 is surprisingly has the same dimensions as the Mako. It has all the same numbers: 41.5 mm diameter, 13 mm thickness, 22 mm lug width and 46 mm lug to lug distance.

Just like the dial design, it seems like Orient don’t want to mess up with a proven formula. The case is not too big and can it most guy’s wrist comfortably. After all it’s designed for the small Asian wrist of the Japanese guys. I’m very sure most guys can pull it off without any issue.

As mentioned earlier, the only difference that the Mako 2 case has with the Mako is that it don’t have the pusher at 2 o’clock. The other bits are just about the same.

The screwed down crown has Orient logo engraved on it (which is a very nice detail btw). It is protected by a crown guard that is extended beautifully from the case. The sides of the case is polished while the top is brushed. There is a slight sloping on the bezel which is quite nice to look at.

Surely, the case isn’t as pretty as pricier watches (like the Seiko SARB033 or Tissot PRC 200 Powermatic 80 ) but then we have to remember that Mako 2 is about half the price of these watches.

A major improvement on the Mako is the upgraded Orient Caliber F6922 automatic movement. As stated in my review of the Mako (you can read it here), the non-hacking and non-manual winding movement (Cal. 46943) is a huge flaw for me.

Not being able to manual wind my watch is a very big problem as you either have to wear it everyday (not possible for those with many watches. What’s the point of buying that Omega/Rolex/Tag only to collect dust inside your wardrobe right?) or use a watch winder (more $$$).

By having a manual winding capability, the F6922 movement just makes life easier. If you are thinking of laying down the Mako for a few days, just give it a good 20-30 rotations on the crown each day to keep it running.

Then after a couple of days when you started missing your Mako, you can just pick it up and wear it. It’s as simple as that. No need for a watch winder which can be quite expensive as they are not that durable.

Moving on to the specification of the movement. It has 22 jewels and beats 6 times per second. It has an accuracy of +-15 seconds per day though many people report that the accuracy of their Mako 2 is much higher than that (some up to +-4 seconds per day which is just awesome). It also has a modest 40 hours power reserve.

Comparison of the Mako (top picture) and the Mako 2 (bottom)

So how does the new Mako 2 fares up against the original Mako? I’ve summarized the details in below table:

As stated above, the main differences between these 2 are the pusher for day change and also the movement. But make no mistake the movement improvement is a giant leap from the original Mako.

For those that has passed on the Mako due to its old movement, then the new Mako 2 might spark that interest once again =)

Where To Buy Orient Mako 2?

If you are looking to buy the Orient Mako 2, look no further than Amazon. The website has everything, including the new Mako 2.

The site lists both variations of the Mako 2 (black and blue dials) for around $150 to $200 apiece ,compared to the much pricier MSRP of $325 on Orients website. Click the links below to check out the best deals of Orient Mako 2 on Amazon.

Orient Mako 2 is a beautiful diver watch that is very affordable for an automatic. It has great dial design with improved movement than the original Mako.

The improved movement also makes it a better automatic watch than its direct competitor such as the Seiko SKX007 and SKX009 as both are non-manual wind and non-hacking (just like the original Mako). I have no doubt that the Mako 2 will be a very sought after watch due to this and the affordable price range.