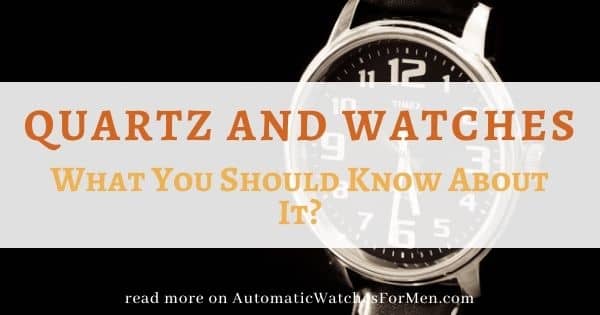 Quartz watch is the primary type of watches nowadays. From wristwatches to wall clocks, quartz watches are used (if the clock uses battery, chances are the watch is quartz). But students are taught that quartz is a mineral (with scientific formula of SiO2) that is present in sands. So why is quartz used in watches?

Quartz is used in watches due to its piezoelectric property, consistent frequency vibration and low cost thanks to its abundance on earth. And with its special trait that produces a consistent and reliable vibrating frequency, quartz is basically the best material to be used in a watch movement for timekeeping purposes.

But wait. Where actually is quartz used in watches? We don’t see any sand in our wristwatches right? Apart from quartz, what are the other materials that can be used? Don’t worry, I’ll answer all of these questions accordingly in this article =)

What Is Actually Quartz’s Role In A Watch?

In any quartz watch, the primary aspect of the watch, which is its timekeeping mechanism, depended on a very small quartz that is cut as to a tuning fork form for it to keep perfect time.

The tuning fork will be vibrated at a predetermined frequency (usually 32,768 Hz) when an electric current is passed on and this can be used as signal for timekeeping.

To illustrate this further, it’s useful to understand how quartz watch works. A watch can be broken down into 3 main component or systems which are:

Energy source is simple – it’s the battery cell or perhaps a wired connection to the plug that provides electricity to the watch.

Timekeeping mechanism ensures the watch is accurate and the time will then be displayed on the watch face (or watch dial) through the use of hands/needles moved by motor and gears.

While the energy source and time display is relatively simple, the timekeeping mechanism, however, is more complex and is basically the heart of the watch. Without it, we don’t have an accurate and reliable watch to be used.

About 2 centuries ago, watches are run purely by mechanical movement – that is mechanical parts that move on their own – to keep time. It’s a genius contraption as these mechanical watch is able to keep precise time consistently which is something that we never thought about in this modern world.

The way mechanical watches keep time is by a balance wheel that oscillates back and forth at a predetermined frequency (typically 6 to 8 oscillations per second). From this, it’s simply a matter of using gears to ensure the correct time is displayed.

However, mechanical movement do have few disadvantages such as expensive, low power reserve/needing to wind often and not very accurate. Technology is all about innovation and quartz watch was the innovation that solved all those problems.

Quartz – The Key To Modern Watchmaking

It all changed in 1969 when Seiko invented the first Quartz wristwatch, the Seiko Quartz Astron, which led us to the age of modern watchmaking (and the slow death of traditional mechanical watchmaking..).

Since then, quartz watch were being mass-produced worldwide and with enough volume, it enables production costs to be so low such that almost everyone on the planet is able to own a watch.

This was not previously possible with mechanical/automatic watches as it’s labor intensive and expensive to make.

So how does quartz become important in watchmaking?

By cutting a small piece of quartz into a tuning fork to be vibrated at a predetermined frequency (usually 32,768 Hz) which is the signal for timekeeping.

Quartz mineral has a strange property which is piezoelectric – it will produce electricity when under mechanical stress and vice versa. Inside the watch, electric current from the battery will be diverted into the quartz tuning fork to vibrate it.

This vibration will be picked up by a microchip and can then move the seconds hand (via motor) when 1 second passes.

Timekeeping is all about the seconds – once we can figure out “how long a second is” and able to produce that consistently, then a watch can be made. And that’s precisely where quartz fits in, to be a signal of how long a second is.

Prior to quartz, mankind did try to achieve this with other methods such as the effort by Bulova to by using a transistor oscillator (recurring element here is an oscillating device, get it?) that vibrates at 360 Hz. This Bulova Accutron was released in the 1960s but it failed to gain much traction.

Then came quartz watch and the world has never looked back since. Being the most abundant material on earth definitely helped making quartz watch more popular to watchmakers.

Coupled with mass production and a booming population, quartz watch becomes so cheap that you can buy one a wall clock for just $5 – so much so almost all households have a clock. This was definitely not possible just half a century ago!

A Bit About Quartz The Mineral

For those of you that already left school long time ago, quartz is a mineral compound made up of 1 part Silica element and 2 oxygen elements, giving it a scientific formula of SiO2.

It’s the most abundant mineral on the earth, appearing in almost all natural rock, sands and soil around us. If you go to the sea, beach, river, mountain tops – basically anywhere nature is, you’re bound to see quartz. By the way, our homes also has quartz as it’s present in the material for concrete. Quartz is just everywhere!

Although we usually imagine quartz to be white in color, in reality it’s color can be almost anything depending on the chemical composition mixed with it such as gray, pink, yellow and brown. As such, it can look bland or quite attractive depending on it’s color.

In terms of usage, watchmaking is actually not the most common uses for quartz. It’s used widely in glass-making, as abrasive material for industries, and even petroleum related activities.

Fact of the matter is many industry related quartz needs, especially those in medicine and scientific research, get their quartz supply from man-made quartz instead of natural quartz.

This have the advantage of getting a better quality quartz crystal without impurities which is commonly the case with naturally-occurring ones. Some watchmakers that seek to create very precise quartz watches do resort to this.

What Other Types Of Watches Are There?

Besides quartz watch, there are few other notable watch types out there. These watch types either have a different movement mechanism or they improve upon the quartz watch to make it better in terms of usabiliy and functionality.

Some popular watch types other than quartz watch are:

The Future Of Quartz Watch

Honestly, I don’t see quartz watch going away soon. It has been around for decades and worked so well. It’s also have been perfected over the decades, so much so finding a different material for timekeeping of the general populace is not needed.

The industry recognizes this and trying to innovate in different ways. For example, other watch movement types such as Seiko’s Spring Drive movement is clearly focuses on the horological aspect which only will entice watch enthusiasts and fans. The same are for other watch makers with their automatic movements.

The standard quartz watch has an accuracy of +/-15 seconds per month which is really great for most people. However, watch manufacturers try to improve this by improving the quartz crystal used, thermocompensation and watch design. The so called High Accuracy Quartz watches boasts great accuracy, some even to +/-5 seconds per YEAR (the Longines Conquest V.H.P).

The second innovation also try to make quartz watch more precise but uses atomic clock and radio technology to do it (as opposed to try making the watch inherently more accurate such as the first innovation) such as Citizen’s Atomic Timekeeping technology.

The quartz watch is equipped with a radio receiver that will pick up radio signals broadcasting the “true time” which was from the atomic clocks stored in laboratories. It will sync its own clock with that of atomic clock daily, so much so you can boast to wear an atomic clock on your hand!

1 thought on “Quartz and Watches – What You Should Know About It?”