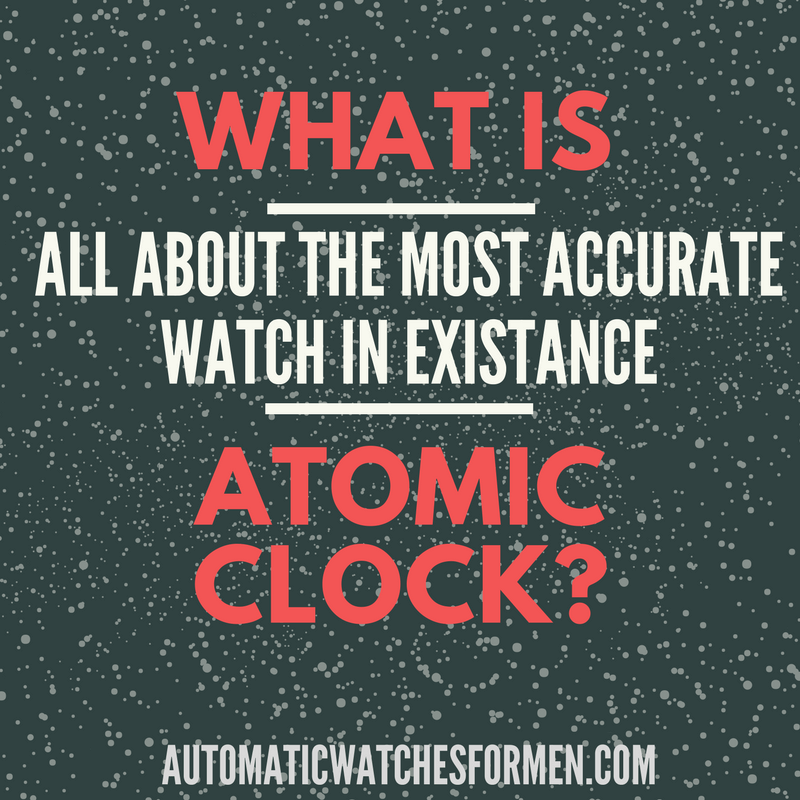 I’m sure most of you have at least heard about atomic clock once in your life. I’ve also touched on the atomic clock in my article about Greenwich Meridian Time (click HERE to read it).

In that article, I’ve explained how GMT is replaced with UTC (or Coordinated Universal Time) system which is based on atomic clock timekeeping, instead of the traditional solar day.

So what is this atomic clock all about then?

What Is Atomic Clock?

Atomic clock is by no means the same as atomic bomb. Trust me, I’ve also had the same first impression when I heard about it, but no, atomic clock does not involve any radioactive fusion or whatever.

In the simplest definition, atomic clock is a clock which uses the vibration (or electronic transition frequency to be exact) of an atom to keep its time. This results in the most accurate watch ever.

One such atomic clock, the NIST-F2, invented by the National Institute of Standards and Technology (NIST), Boulder, Colorado. As you can see, the atomic clock is no more than a laboratory apparatus that keeps time!

But atom is very small (base element of all materials) and to observe the vibration of such miniscule things are very complex and costly. So why do we have to go to that extent? It all boils down to…

Referring back to the normal watches (automatic/mechanical and quartz), all of them has their own way of keeping track time. Automatic watches with its balance wheel/escapement and quartz watches with its quartz crystal oscillator.

These devices has their own definition of one second. Automatic watches typically has 6 or 8 beats per second – the oscillations of balance wheel assembly.

Normal Quartz watches on the other hand has 32,768 vibrations per second of the minuscule quartz crystal. These vibrations can be used to move the second hand accordingly.

But, as with all man-made items, these are not perfect and has differences which contribute to inaccuracy. For example, the best automatic watches can gain/lose up to 6 seconds per day, while quartz watch up to +-10 seconds per month.

It’s alright for normal people to use these watches, but it’s terrible for machines and complex computers which need accurate time up to many decimal places (e.g 15.993842 seconds).

This is where the atomic clocks come in. The vibration of atoms when transitioning between high and low energy states are very fast and it has lower rate of inaccuracies. The current NIST-F2 atomic clock will not lose a second in 300 years!

Scientists have been toying with the idea of using atomic transitions to measure time for decades now. But it was not until 1945 when Isidor Isaac Rabi proposed to use magnetic resonance to practically do it.

The first atomic clock was built in 1949 at the U.S National Bureau of Standards (NBS, now National Institute of Standards and Technology, NIST). It proved the idea could work, but the accuracy is not that great.

The first truly accurate atomic clock was invented in 1955 by Louis Essen and Jack Parry at the National Physical Laboratory in UK. They developed the world’s first Caesium-133 atomic clock.

Since then, the development of atomic clock advanced rapidly to unimaginable heights.

With the invention of a really accurate atomic clock, scientists were able to use it to redefine 1 second.

Now, why is 1 second so important?

It’s simply because that’s the basic unit of all time. There are 86,400 seconds in one day (60 seconds x 60 minutes x 24 hours). Historically, 1 day is defined as the solar day from observations at Greenwich.

But astrologies and scientists observed our daily earth rotation is not constant, that is some day it’s fast and some day it’s slow. Because of this, the definition of time can be slightly off for a few seconds.

It’s no big deal to me (and I doubt you guys won’t notice too), but unfortunately this will cause erratic behavior with high tech machines and technologies.

GPS, internet, satellite system, telecommunication, power grids – all of these rely on an accurate representation of time.

So in 1967, the International System of Units (SI, the body that governed all scientific units) defined 1 second as the duration of 9,192,631,770 cycles of a Caesium-133 atom changing its energy level.

But why Caesium? Honestly, I’m not really sure why but I believe it’s the best element for this purpose (if you guys know the real reason, do let me know ya!).

Caesium metal, the element chosen as the standard for timekeeping

Using the natural properties of something as atom eliminates any errors due to manufacturing, as the case with automatic and quartz watches. It’s much more stable.

And notice the huge number of vibrations per second (9,192,631,770). This means even if there is some slight variation in this number, the inaccuracy will not be that much in the end.

How Does Atomic Clock Work?

Sine 1949 when the first atomic clock was invented, there are many types of atomic clock being made. NIST itself has about 9 atomic clock variations, each latest invention having greater accuracy from its predecessor.

I doubt I can correctly explain how does these atomic clocks work. So it’s best if I embed some awesome youtube videos with animation on how it works.


Above video is from the EngineerGuy which concisely explain on the atomic beam standard.

The method uses a beam of atoms (Caesium-133 or others such as Rubidium-87 or Thallium-205) subjected to microwave frequency.

If the frequency is not the same, a spectrometer detector at the end will pick it up and use it as a feedback loop to change the frequency until it get to the desired level.


Above is an introduction video on NIST-F2 Caesium fountain clock, which has the accuracy of gain/lose 1 second in 300 million years!

The method involves cooling the atoms and lumping in together. The atom ball is then bounced up and down in a 1 second interval. The observation time for the atoms are much longer since cooled atoms move much slower.

A simple diagram explaining how the fountain standard works. It sure looks simple here but the engineering and research behind it is enormous!

Where Are The Atomic Clocks Located?

Currently, there are 420 atomic clocks around the world in more than 50 countries. The time from these clocks are aggregated and average out and feed into the International Atomic Time (TAI, from the French – Temps Atomique International).

The TAI is the internation time of earth, and is the basis for UTC. The main difference is UTC is for civilian usage and incorporates leap second.

Atomic Clocks Are Cool! Can I Have One?

There are some atomic clocks which can be bought cheaply, though those are nowhere near the accuracy of the clocks in national laboratories. Those high accuracy clocks require millions to set up, and some other millions to assemble the team of PHDs to run and troubleshoot it.

Rather than owning an atomic clock, we can always buy a normal clock which can set itself to the atomic clock based on radio signals. These clocks are called radio controlled watches and there are plenty of these in the market right now.

Citizen makes the cheapest watches that can sync with atomic time through radio signal. Above is the Citizen Eco-Drive Perpetual Chronograph

Most of them would pick up the signal from the nearest radio tower and reset its time once a day. This is the easiest way to get an atomic clock precision in your house. Some more technologically advanced wrist watches also incorporate this technology in them.

In case you guys need more information, do check out these links below.

It’s very interesting to know how mankind strives for accuracy on something as common as 1 second. But it’s more astonishing on how these discoveries had helped shaped our civilization.

GPS, for instance, rely heavily on accurate timekeeping. On board of each of the GPS satellites are atomic clocks. Accuracy in time between these clocks and the clock in our GPS receiver will determine how accurate our position will be. Just a few nanoseconds off could mean some hundred yards away!

So, the next time you see the time on your smartphone or computer, remember there are huge efforts behind it to give us the most accurate time ever.

Hope you guys enjoy this article on what is atomic clock, it’s history and how it works. Let me know if you guys have some comments or questions about it.

Don’t forget to share this article if you love it =)

Till next time. Cheers!
Isaac

4 thoughts on “What Is Atomic Clock? – All About The Most Accurate Watch In Existance”