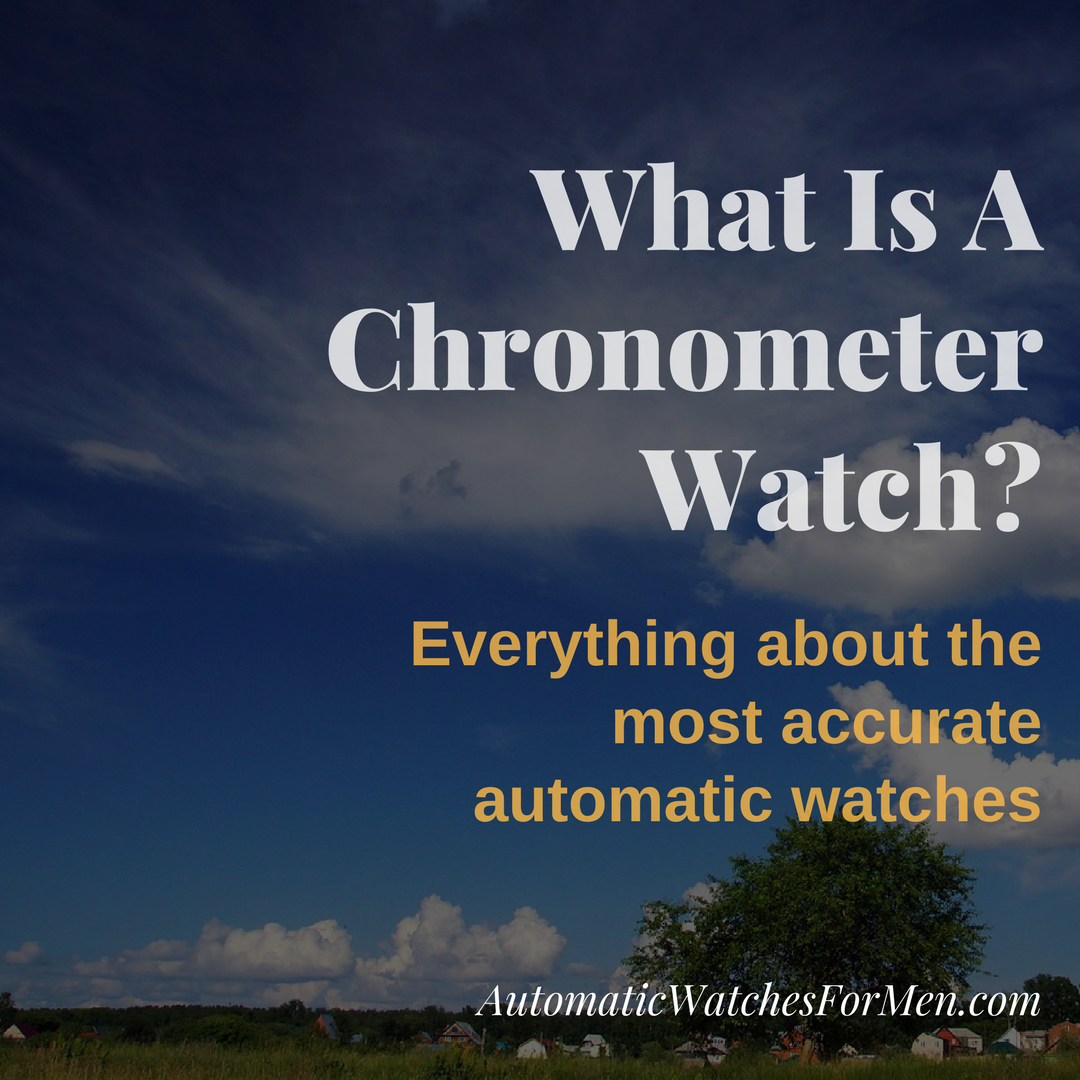 Someone is not a real watch fan if he does not know what a chronometer is all about. This horological jargon is indeed a bit overwhelming at first but as I can attest, it’ll become easier as we read more and more about the world of watches.

So what is a chronometer?

Chronometer, in the easiest explanation is an accurate watch. And by the way, the term is mostly used for automatic watches only nowadays.

What differentiates a chronometer and a normal watch?

It is well known that automatic watch is not the best in terms of accuracy. Normal automatic watches (at least the more affordable ones) have an accuracy of about +-15 to 25 seconds per day.

Despite its price, not all luxury and high-end automatic watches are chronometer. You just got to ensure the “Chronometer” wording is on its dial to find out. p/s: Rolex holds the record as the manufacturer with the most movements certified as chronometer

Of course this is unacceptable for those involved in fields that require precise timekeeping (more about that later on below).

Due to this, the Chronometer standard is invented to certify automatic watches that have the utmost accuracy, with maximum -4 or +6 seconds per day.

Thus in short, chronometer is a watch with greater accuracy.

Is Quartz Watch A Chronometer?

One thing that will surely be in everyone’s mind is whether a quartz watch can be called a chronometer or not.

By going the technical specification, all quartz watches will qualify as chronometer as it have a much better accuracy (+-10 seconds per MONTH).

But we have to remember that quartz and automatic watches are different animals altogether and should not be put into competition against each other.

Due to this, chronometer watches nowadays almost always refer to automatic watches.

There exist quartz chronometer, which is a quartz with very precise accuracy but it’s not really used.

People already know that quartz watches are accurate so it seems a bit useless for watchmakers to make a quartz chronometer.

Difference Between Chronograph And Chronometer

Before we go deeper into chronometer’s origin and certification, I would like to clear the air about the most common misunderstanding around it: is Chronometer the same as Chronograph?

To recap, a Chronometer is a precise watch. Chronograph on the other hand, is a watch with a stopwatch feature. Similar terms, but two very different things.

This is a chronograph watch – notice the extra subdials and pushers that are used to operate the stopwatch function (the watch is the Tissot Couturier Automatic Chronograph). But it is NOT a chronometer.

Chronographs are made by including an extra feature into a normal watch. The result is a watch that can also function as stopwatch at the same time.

The easiest way to tell them apart is by their looks. Chronometer has a normal watch look with the signature “Chronometer” on its dial for easy identification.

Chronograph has extra subdials and pushers to operate and show the stopwatch time.

There are also chronographs that have the Chronometer certification, making them the most accurate Chronographs ever. And yes, those don’t come cheap =P

The origin of Chronometer started from the 18th century due to marine navigation needs. Around that period, there was no accurate and easy way to know the longitude of a seafaring vessel.

As I’ve mentioned before, coordinates of anything on earth can be broken down into Latitude (vertical location from South to North) and Longitude (West to East).

The earth is divided (imaginary) by vertical (longitude) and horizontal (latitude) lines over its surface.

While the latitude was easy to be determined using a device called Sextant, the longitude was more difficult as there was no accurate way to do so.

Due to this, various ship collision problems occurred at that time, with the most infamous being the Sicily Naval disaster in 1707.

What happened was the British naval fleet lost 4 warships due to collision with the rocks of Isles of Sicily.

This prompted the British government to establish the Longitude Act. The Act’s purpose is to reward those that can find a good and reliable method of determining a ship’s longitude.

John Harrison And His Sea Watch

John Harrison, a watchmaker, took up the challenge. His idea was to design a watch so accurate, than naval officers can use to keep track of time at London or so-called Greenwich Meridian Time (GMT).

It was known that the world is divided into 24 sections of longitude, each has a width of 15 degrees (or the Time Zones). At any point of time, the local time difference of each zones is one hour apart.

From this, a ship can take that “sea watch” which was set with the GMT onboard.

At any location, the naval officers can get the local time using the position of the sun and calculate its current longitude from the time difference with the GMT.

Challenges To The First Sea Watch Or Marine Chronometer

The method was sound, but the only problem was how to create a timekeeping device that accurate?

To create the first marine chronometer, Harrison needed to make the watch accurate, while also not being disturbed by adverse temperature, pressure, humidity, salt air corrosion and the constantly moving ship.

Current automatic watches can do that, but not the available technology in the 18th century!

After decades of research, Harrison was finally able to create the first marine chronometer, his No.4 or H4 watch. It had the most complex movement at that time and was also very expensive to manufacture.

Above is the No.4 or H4 marine chronometer watch. It was a very big watch at 13 cm diameter!

The movement inside the marine chronometer was made using precious materials. Even in the 18th century, Harrison was able to relate the usage of better materials with precise timekeeping

While the naval officers needed chronometers to tell its longitude, railroad operators needed it to ensure there was no two trains inside one track at the same time.

To ensure this, the rail engineers needed to have a very accurate watch to keep everything in order.

An interesting fact is that while John Harrison was the one to develop the first chronometer, the term “Chronometer” don’t come from him.

The term was first used by one Jeremy Thacker to describe very precise clocks. He tried to make a watch encased in a vacuum for this purposed but failed.

How Can A Watch Becomes A Chronometer?

Now let’s get back to the current time. How can a watch becomes a chronometer?

Strictly speaking, only thos watches that have pass the strict testing of the governing body of Swiss’ Chronometers, the COSC, can be called a chronometer and use that term on its dial.

But what exactly is this COSC and what tests a watch has to get through?

The Contrôle Officiel Suisse des Chronomètres or COSC is the official institute on certification of chronometers in Switzerland.

All Swiss watches that have been tested by the organization will be granted the “Chronometer” status and have the right to use the sought-after title on its dials.

The watches will then be given a serial number and certificate.

So if you’re buying one of these, make sure you get your chronometer certificate and the serial number tally with the watch itself.

The testing of Chronometer is based on ISO 3159 and lasts for 16 days. 15 time measurements are taken after each day.

Over the course of 16 days, the watch is put in 5 different positions at 3 different temperatures.

Summary of the COSC Chronometer testing criteria as below:

The one thing that we can conclude is the testing seeks to ensure all chronometers have consistent accuracy throughout its testing period in different positions.

It’s fairly easy for even a cheap automatic watch to get -4 or +6 seconds/day but I bet it won’t be able to hold that kind of accuracy while being used in a 2 weeks period of time.

And that’s the main purpose of chronometer: an automatic watch that will keep good time in all conditions.

Is Chronometer A Thing Of The Past?

Yes, it is. With the current technology, chronometers are not used in industries anymore. GPS is the norm onboard all ships providing round-the-clock and accurate positioning.

Railroads use integrated railway systems to give real-time and automatic train management.

How about to keep precise time? Atomic clocks with absolutely great accuracy (some will only deviate by a few seconds per MILLION of YEARS) are widely used for all systems in the world, be it military or civil.

Conclusion: Should YOU Get A Chronometer?

In my opinion, this rely heavily on what you desire (and your bank account too, of course).

A cheap $10 digital watch is much more accurate than the most expensive chronometer, but it’s form and ubiquity are the reason why it’s not something that everyone will want to wear.

Besides, I don’t think a cheap digital watch will be a great conversation starter. Not to mention it’s not really a good fit with a suit for business and formal wear.

Automatic watch, on the other hand, is more special. Though it’s not as accurate as any quartz watch, it’s mechanical movement has deep character which was the culmination from centuries of innovation.

And it’s not just a watch though. Many watchmakers can be regarded as jewelers as they make these tiny timepieces with detail and intricate craftsmanship.

As many guys already know, a watch is actually a man’s jewelry.

It’s why many people that can afford it buy automatic watches: for it’s characteristic and beauty.

Having a chronometer will make it even better as the watch will have a better accuracy as compared to normal automatic watch.

But even if you opt for a non-chronometer watch, it’s still fine. It’s just you’ll need to reset the time more often. In the end, it depends on your means and what you want =)

I hope you guys like this article. Let me know if you have any questions or comments regarding chronometer watch.

I’d love to hear from you guys about it =)