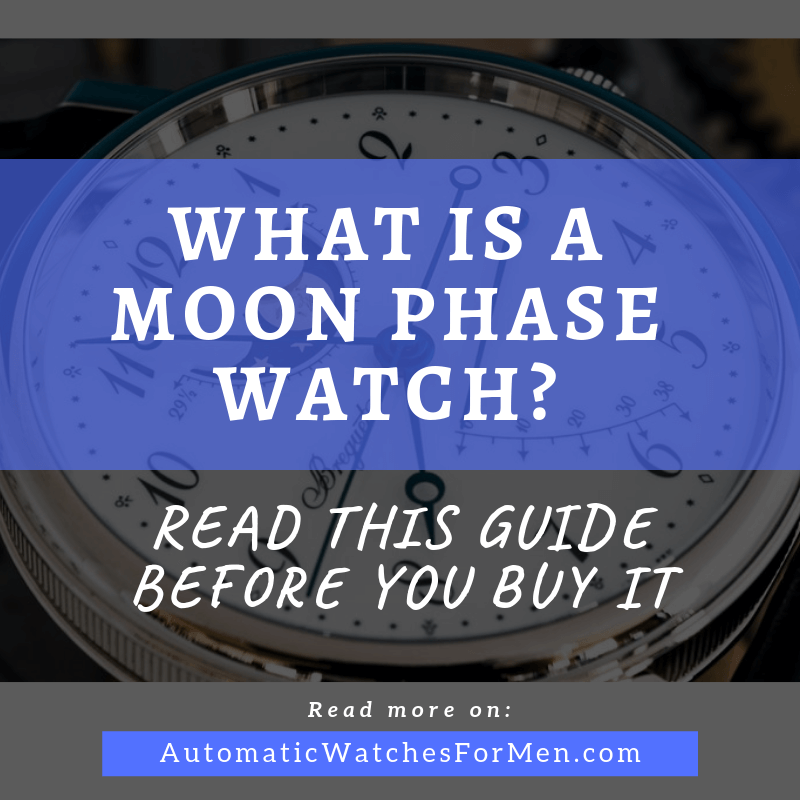 For automatic watch fans, you will surely been exposed to some special watches such as moon phase watch. It looks beautiful but what does it actually do? I tried to find out and here it is.

So do you really need a moon phase watch then?

For a large majority of people, the answer is no. It’s not a relevant piece of information needed in this current age.

We’ve already moved past the moon/lunar calendar for centuries now, and currently, almost everywhere is using Gregorian Calendar based on earth’s revolution around the sun.

But for watch enthusiast that love everything about watches, a moon phase watch can be a very interesting item.

And don’t get me started on how cool the moon phase watch looks like. Putting it on a dress watch will bring it to another different level of classic style that’s just very attractive (at least to me LOL!).

So if you’re interested in moon phase watch, then this article is for you.

In this article, I’m going to share about what is a moon phase watch, some introduction about moon phase, moon phase watch characteristics, its mechanism, pros and cons and whether you should buy one of these or not.

Let’s start now then shall we!

An Introduction To Different Moon Phases

Before we go to the watch itself, I think it’s worth it to explain about the different phases of the moon (or more accurately the moon that we see from earth as the moon itself don’t change in shape).

I think everyone knows that the earth moves around the sun while rotating about its own axis. This phenomenon are what causes yearly seasons and day & night respectively.

But do you know that the moon (a celestial object in outer space – or just a rock floating in space) also moves around the earth at the same time?

Since the moon is much smaller than the earth (about 25% smaller in volume and 81 times lighter in mass), it will be attracted to the gravitational pull of the earth and hence, why it moves around it.

The movement of the moon around the earth takes about 29.53 days (earth time days) and is the reason why the moon that we see at night changes in its appearance.

The reason why we see different moon phases is because of its place around the earth. Remember, we can only see the moon if the sun shines on it.

So if the moon is in front of the earth (moon located between earth and sun), we will not be able to see it! This phenomenon is called new moon.

Likewise, if the moon is behind the earth (earth located between moon and sun), we will be able to see the moon since the sun illuminates it completely and this is called the full moon.

Please have a look at the chart below for the various moon phases:

Another chart showing the day to day shape of the moon phase:

Without a doubt, moon phase is a very beautiful phenomenon. And since it can be easily observed, moon phase had been widely used as the basis for calendars in many ancient civilizations and even for religious reasons (Islam, Chinese, Korea, Hindu are some of the religions that use calendar based on moon phase).

What Is A Moon Phase Watch?

With that out of the way, let’s get back to the moon phase watch.

So what is a moon phase watch all about? It’s simply is a watch with an added function to show the current moon phase on that day.

Almost all moon phase watches have a dedicated subdial to show the moon phase (except for electronic watches). The moon phase is usually depicted by a yellow/gold circle on this subdial.

There’s also a “bosom” or two semi circular cut out on the dial at the left and right of the subdial. The yellow circle is painted on a black/blue disc and will rotate at a slow speed to reflect the moon phase movement.

Thanks to the “bosom” cut out, the moon phase was shown by hiding some part of the yellow circle depending on its position. At full moon, the yellow circle is located front center and can be seen in its entirety.

Watch this video below to see a simulation of the moon phase watch:

How Does Moon Phase Watch Works?

It largely depends on the mechanism of the watch. If it’s quartz or electronic based, then the internal workings are programmed on the watch and things are much easier (as the lunar calendar can be accurately calculated).

For automatic mechanism, things are a bit messier. The moon phase watch works by a set of gears to slowly shift the moon phase daily.

The challenge is in how to keep it accurate. As mentioned above, a full lunar cycle is about 29.53 days, which is not a round number.

This poses a problem on keeping the moon phase watch accurate as the gears will need to be large enough to iron out the time difference.

A typical 59-tooth gear will be able to keep the moon phase accurate to 2.5 years. Of course, there also exist higher end watches with more accuracy up to decades and even centuries (or even once every 2 million years, as the case with the Lune Exacte.

Although it might not seem like much, but a higher accuracy of moon phase is more attractive as it shows the expertise and engineering feat of the watch maker.

It also has a more practical reason in the form of not requiring to set it, which is a bit more tedious that you’d think.

Again, it largely depends on the mechanism of the watch. For a quartz or electronic watch, setting the moon phase is easy as everything was programmed into the watch from factory.

But for automatic watch, setting a moon phase can range from medium to hard, ranging from watchmaker to watchmaker. A few things to keep in mind if you’re interested in a moon phase watch are:

So yeah, adjusting and setting the moon phase is definitely tricky on an automatic watch. Still think it’s worth it?

Should You Get A Moon Phase Watch?

We’re getting to the big question now: should you get a moon phase watch?

It largely depends on you. As I’ve mentioned earlier, moon phase is not a relevant information in the current age, for most people, at least.

I do note that it’s being used for some other religious calendars, and you might want to get the watch for that info.

But still, almost 99% of the people that I’ve met don’t find moon phase to be a very important piece of information to them.

If you’re an automatic watch enthusiast and watch collector, then the moon phase will be of value to you.

It’s different and more sophisticated than a normal automatic watch. Plus, the moon phase indicator & subdial are usually gorgeously done, lending a very classic & stylish look to any dress watch.

I collect watches and enjoy having different watches in my watch box. To me, having a varied watch is one of the goal – I mean why would I want to collect the same dress/dive watches right?

And yet you still need to remember that automatic moon phase watch is a pain in the ass to be set, more so the perpetual calendar types.

So do remember that if you want your moon phase watch to be fully functional all year round, then you either need to wear it every day or put it on a watch winder.

Keeping it constantly moving is important so that it won’t drop dead and you don’t have to fidget around for minutes just to set it.

But if you’re just in it for collection and don’t care about the moon phase, then buying it and keeping it like normal watch is acceptable too.

And as always, a quartz or electronic watch is more suited to such complications. So if you need the moon phase information (for whatever reason), a quartz watch is a good option (another advantage of the quartz watch there).

It’s reliable, accurate and a much cheaper moon phase watch rather than automatic.

Below is the summary on should you buy moon phase watch or not:

Some Moon Phase Watches Out There:

While it was previously exclusive for higher end watchmakers, the moon phase watch is also being produced by lower end brands right now.

This makes it more affordable to own as compared to the thousands of dollars that brands like Patek, Jaeger LeCoultre and A Lange & Sohne will charge for their moon phase watches.

Here, I’d like to introduce to you some of the moon phases watches out there:

1- Casio AQW101-1AV (Quartz/Electronic): A cheap analog + digital watch that has myriad of functions including the moon phase indicator.

It has an utilitarian look and well suited for those that want a tool watch with many functions. Being a quartz and electronic watch also means its one of the cheapest moon phase watch around.

To be honest, it’s not my cup of tea but I feel that I need to put it in this list to let you guys know that moon phase watch don’t need to be expensive. In fact, it can be quite cheap just like this Casio.

Graf Zeppelin is from Germany and their 7036-3 Moon phase watch also comes with dedicated subdials for day and date.

These guys really know how to make a beautiful watch as it looks pleasing even with the busy dial.

It also has dedicated subdials for day & date and comes in white simplistic design.

True to Orient, they have equipped a power reserve indicator on this watch too, one of the most important feature on an automatic watch IMHO.

Like the Orient Star, this watch also has a date indicator too.

The watch is definitely a piece of art, with the classic styling of the dial with blued hands and big numeral markers reminiscent of a pocket watch.

If you love the Speedmaster, then this moon phase version is surely going to be something special.

After all, the Speedmaster was the watch worn by the astronauts that went to the moon a few decades back so to have the moon phase indicator is very appropriate for a watch with a rich history like this.

A moon phase watch is definitely not something that everyone needs. The moon phase information is not really needed now and in my opinion, a day and date display is much more useful.

But then, moon phase watch does have interesting characteristic in it. Especially for an automatic moon phase watch, the movement is more complex and thus very appealing to watch enthusiasts.

Not to mention most watchmakers usually make the moon phase indicator with beautiful styling. It’s definitely a step up from normal 3-hands watches.

If you do intend to get one, do remember that handling a moon phase watch is a bit difficult compared to normal watch as the setting can take a while to do.

With all that being said, a moon phase watch is an exquisite invention that is very cool to look at =)

I hope this article have explained to you about what is moon phase watch all about. Do let me know if you have any questions or comments.

2 thoughts on “What Is A Moon Phase Watch? Read This Guide Before You Buy It”