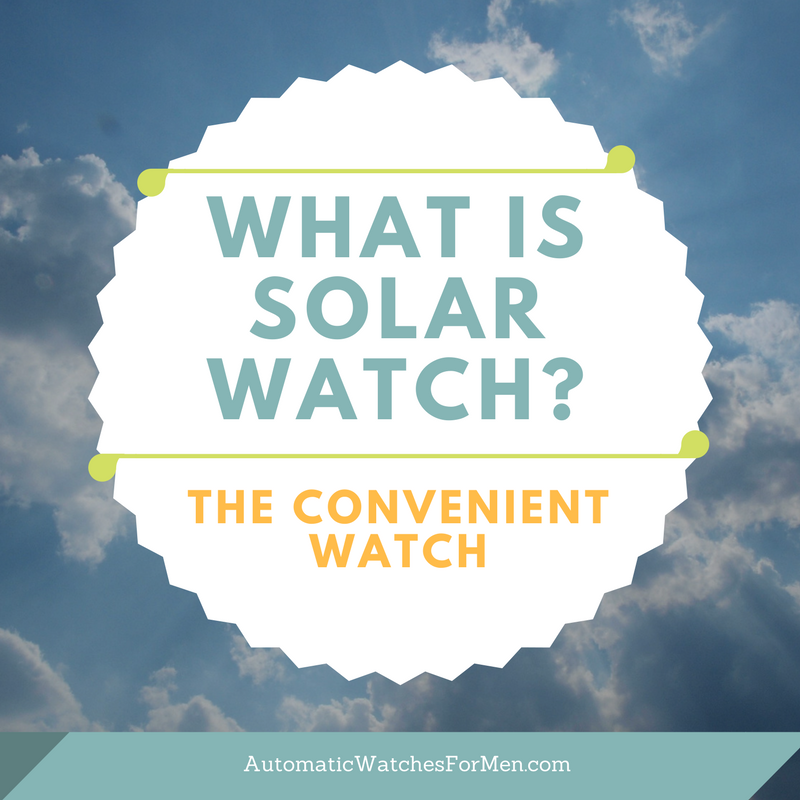 Solar is one type of renewable energy that we can use in our daily lives. I’m really fond of solar – it’s free, very clean, no pollution and it’s always accessible to everyone (except during cloudy/rain days of course lol). So you guys can imagine how excited I am with a solar watch.

I first encountered solar powered appliances when I stumbled upon a calculator with the black solar panel strip when I was a kid. As long as there is sufficient light, the calculator can be used anywhere. I was really impressed with it, and has since held solar power in high regard.

Fast forward to current time, solar power is still not as widely used in the world. Even though it’s a clean energy without pollution, it’s still only 1% of the total electricity generation of the world.

High cost of photo-voltaic cells (or solar cells) and infrastructure cost of solar farms constraint its growth though experts believe this cost will go down further in future with better technology.

But in the world of watches, solar power has been a good alternative to normal watches for years, thanks to the effort by watchmakers.

So what is solar watch? Solar watch is basically a normal quartz watch powered by solar. Read on to find out why I believe solar watches are one of the most convenient watches you’ll ever own.

It all begins around 1970s when the watchmakers at that time wanted to improve upon their quartz watches. Normal quartz watch uses battery to power it but as we all know, battery has a limited electrical charge in it and has to be replaced when the charge depleted.

The usage of solar power for watches can be related to its application in satellites. During the golden age of space exploration in 1950s, solar panels are hooked up on satellites. The electricity generated will be stored in a rechargable battery to prolong a satellite’s usage life.

The first solar powered watch is the Synchronar, invented by Roger W Riehl. The watch looks futuristic with the LED display at the side and solar cells on top of it.

The first Solar watch was invented in the 1960s is the Synchronar 2100. It features a full solar panel on top of it with the time display at one of its sides. What a real futuristic watch!

Citizen then followed suit with its Crystron watch, an analog watch with solar cells on the dial. Seiko also released their own version of solar watch, with the solar cells on top of their famous digital watch.

Citizen released the first solar watch with analog display – the Citizen Crystron. Notice that the four solar panels are directly on top of the panel for a not too glamorous look.

As we can see, most of the early solar watches are not that good looking since the boring gray solar cells has to be put on top of the dial. But that’s 40 years ago.

Nowadays, most solar watches have solar cells underneath the dial, thus enabling its dial to be as good as normal watch.

Above is the Citizen Promaster Diver, an example of a watch powered by solar/light

How Does Solar Watch Works?

The working mechanism of solar watches is very simple. Its only difference with normal quartz watch is in the additional solar power generation.

The solar cells above or underneath the dial will absorb light (sunlight or artificial light) and convert it into electrical energy. This is called photo-voltaic effect which is why solar cells are also known as photo-voltaic cells (or short as PV cells).

Electrical energy will then be stored in a rechargeable battery with an overcharging cut-off function. From here, the operation of the watch is basically the same as normal quartz watch.

The mechanism is fairly simple, but there were many challenges since a wrist watch is very small. So the main challenge is to make sure the solar cells and battery is super efficient even with its small size.

Most solar watches nowadays have a minimum of 6-months power reserve from full charge, thanks to advancement in battery technology. We can simply charge it by exposing it to any light. Now that’s very convenient right?

But one thing that I believe we can improve in on the efficiency of solar cells. For instance, most solar watches will quickly build up electrical charge under bright sunlight but will take a really long time to store charge from normal house/office lighting (refer to below table).

I really would like to see the solar cells recharge under normal lighting much much faster than the 320 hours required. That’s just too long right?

So what are the advantages of solar watches? Below are some of it:

Currently, there are only a few watch manufacturers/brands that produces solar watches. Some of the more common ones are:

If you guys know any other brands, let me know will ya!

One of the solar watches by Seiko, the Seiko SSC017, a handsome diver’s watch with chronograph function

As with any watches, solar watch does has its own problems, with the most common being the solar cells and the rechargeable battery.

If the battery won’t charge even after you’ve put it under an intense light, then there could be a problem with the solar panel or the battery itself.

Often times, this can be due to an old solar watch. The batteries has its own life and will degrade with usage. It’s just like how our laptop batteries will have problems (slow charge, very fast depletion, etc) after some years of use.

If this is the cause, a battery change will be needed but still, please contact the watch manufacturer and send it to them for inspection to be sure.

Tissot T-Touch Expert Solar is one of the solar watches by the Swiss brand. It features their famous tactile screen as well as a good 1-year power reserve

Are You Charging It Right?

If the watch is new, but you still has problem to make the battery full, then you might be charging your solar watch wrong. There are three main aspects to take into consideration when charging the watch:

Sunlight is the best. It has the highest Lux intensity and will quickly charge the solar watch. Artificial man-made lights can also be used but it will take a longer time.

But too faint of a light, such as moon light or street light in the night are insufficient and won’t be able to charge the watch. Also, do remember that keeping your watch underneath your sleeve will obstruct light from getting to the watch.

While bright sunlight can charge the watch in a few hours, office/home lights will require longer time to charge. For optimal battery charging, try to expose the watch to bright sunlight for some 30 minutes or so once a week. In addition to charging the watch, you can also get that useful Vitamin D =)

For artificial lights, the distance to the light source will determine its intensity. For example, putting the watch very near to a lamp will give a higher intensity, as opposed to normally wearing it in an office environment.

So, try to not be very far from a light source. You can also charge the watch by putting it below a lamp desk for a few hours. Just make sure the light does not heat the watch as this can damage it.

For more information on recharging the watch, click the links below to check out the manuals from Seiko and Citizen:
Seiko Solar Charging Manual
Citizen Eco-Drive Recharging Guide

Don’t Have Time To Charge It Under The Sun? Use The Solar Watch Charger Instead!

If you don’t have the time to wear your solar watch under the sun to charge it up, consider using the solar watch charger instead. It’s basically a light bulb that has a flat face on top of it to put solar watches.

It has a 30,000 lux light intensity which is almost as good as direct sunlight. This means it will require less time to charge fully.

One key important thing about the device is the cool LED bulbs inside it. Using LED bulbs will not generate excessive heat like normal electric bulbs. This is very important as we don’t want the electronics and battery inside the solar watch to be fried.

It’s very easy to use the Solar Watch Charger. Just plug the USB cable and put the solar watch face down, and let the bright LED light charge the watch

Also, the device is plugged using a USB cable for the best portability. At less than $30, it’s definitely a great product for solar watch owners.

->Click Here To Check Out The Solar Watch Charger On Amazon<-

Solar watches is deemed to be the next step in the progression of watch technology. This renewable energy is the future of mankind, when all those fossil fuels are mined and gone.

With a solar watch, we are getting a real low maintenance watch that does not need a battery change every few years. And it’s long power reserve is something that all automatic watch owners will envy.

For a unique watch with a cool technology inside it, solar watch is one good watch to own.

I hope you guys find this article interesting and has helped to answer what is solar watch, it’s history and other related aspects. Let me know if there is any questions or feedback on solar watches.

What you guys think about solar watches? Drop your thoughts below =)

Till next time then. Cheers!
Isaac

6 thoughts on “What Is Solar Watch? – The Convenient Watch”