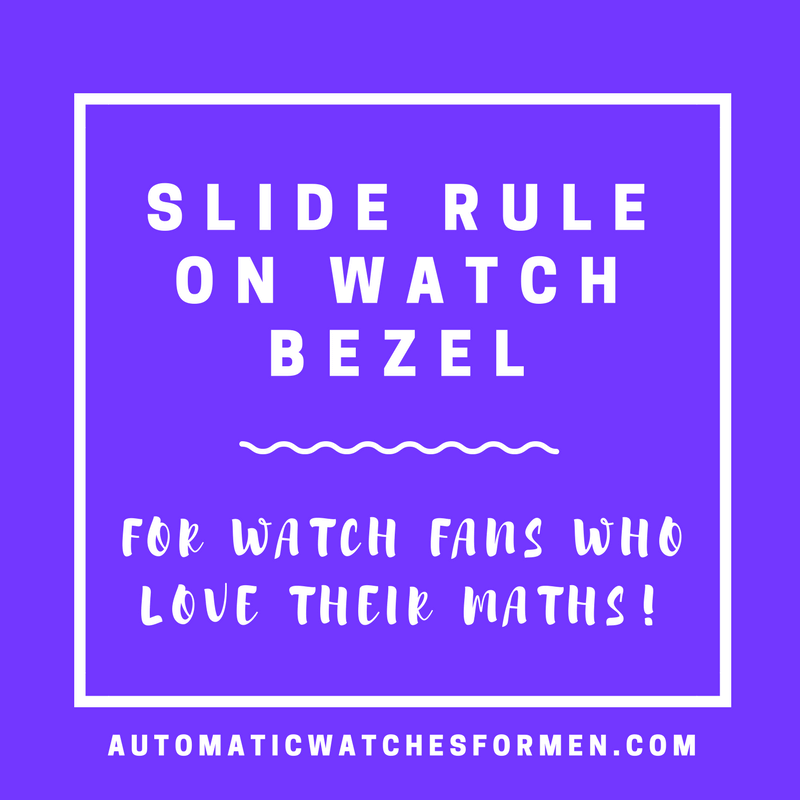 Today I’m going to write about slide rule on watch bezel. I’m sure you guys who are aviation watch fans will notice that some of those watches have 2 scales on the watch, one on the bezel and one on the dial.

A Seiko Flightmaster SNA411 with rotary slide rule on it. Notice the two small scales on the bezel (a bi-directional rotating bezel) and on the edge of the black dial. These two scales make up the slide rule.

Well guys, those are the slide rule (or rotary slide rule since it’s a circular rule now). But what actually is slide rule? Who invented this thing? How to use slide rule on watch?

Don’t worry guys, I’ll answer these questions in this article. Let’s take a look at what is slide rule first.

What Is Slide Rule?

If you have been born prior to calculator invention, then you might have been fortunate to use a slide rule during school or work. But I bet most of you guys don’t know what it is.

What is a slide rule?

Slide rule is a nifty tool invented hundreds of years ago to help its users to quickly do many complicated calculations such as:

As you can see, there is no addition or subtraction in the list since those are very easy to be calculated manually on a piece of paper or just inside our head (I can’t really do this but I’ve know a few gifted people who can!).

By using slide rule, these more complicated calculations can be done quickly without resorting to tedious manual calculations which has lots of room for erros. In short, slide rule is the ancient calculator before the calculator as we know now!

An English mathematician, Reverend William Oughtred was widely credited for the invention of slide rule in the 1630.

He used the prior inventions of logarithm and logarithm scales by John Napier and Edmund Gunter respectively a few decades ago to create the slide rule, becoming the first person to use two scales of logarithm, one sliding on the other, to perform multiplication and division directly.

This invention was then widely used in lots of professions that require complex calculations such as engineers, astronomers, scientists and such.

Having such a great tool at the time when all calculations had to be done manually was like a dream come true for them.

As much as Karl Benz revolutionized the world with his car, so does the slide rule to how mathematicians and scientists do their work.

Slide rule was very popular until the mighty computer came….

And Then Comes Electronic Calculator

The advent of computer mark the decline of slide rule. As first, big old computers were invented that can do everything slide rules can do but with more precise calculations.

Since those machines were bulky and expensive, slide rule was still the preferred choice since not everyone can afford these computers.

The invention of cheap, easy to use handheld scientific calculator marked the death of slide rule. How can it possibly compete against such an accurate machine?

But then the computer became smaller and cheaper. Around 1970s, handheld electronic calculators can be had for less than $50 and this marked the end of slide rule’s usage.

How good is electronic calculator compared to slide rule?

And the best advantage is calculators can give out more accurate results that is impossible to get from a slide rule.

This is very important for scientists that require perfect and accurate calculations in their work.

A promotional poster by IBM on how their computer can help with calculations, so much so one computer can do the job of 150 engineers. How true is this!

Just with a small piece of machine, most of the calculations can be performed. It is no wonder that slide rule was kicked out by this very convenient tool.

But the slide rule on an aviation watch is not just meant for normal mathematical calculations.

In addition to the normal 2 logarithm scales, the rotary slide rule (since it’s not a normal ruler, it’s called rotary by some) is also specially designed for aviation related calculations such as rate of climb/descent, flight time & distance, fuel consumption as well as major unit conversion.

This is easily done by putting more information on the scales and. In the end, this was all for the purpose of making the aviation watch a powerful tool for pilots.

The basic anatomy of a rotary slide rule on a watch is:

If you can notice the scale is not linear, that is the distance between each markings become smaller as it increase in value.

2- Outer Logarithm Scale – Same scale as the inner scale, 10 to 90 markings. The difference is the outer scale is usually marked on a bi-directional rotating bezel so that it can be slide.

Some watches do use their outer scale on an inner chapter ring which can be rotated by a dedicated crown (such as the Citizen Blue Angels watch).

3- Other scales – such as tachymeter, distance units conversion (nautical mile, statute mile, km), time conversion and others. This will depend on the watch maker on how busy they want the watch to be.

How To Use Slide Rule On Watch?

So how does one use a slide rule on watch? Well, there are lots of calculations that can be done but I’m going to cover the 4 usages that I feel is the most useful to us.

Multiplication is easy it involves one digit. But when it becomes 2 or more digits, things get nasty. Slide rule can be used to do this easily. So suppose you want to find out the product of 55 x 50.

Division is harder than multiplication but slide rule will help to make the calculation easier. Suppose we are trying to know the answer to 300/55.

Finding the square root for a number is challenging for most people (speaking truthfully here guys lol!). But once again, slide rule can do the job. Unlike the other 2 above, finding square root require trial and error.

By far the easiest one to use and the one we have more possibility of using in daily life a lot. Let’s say we want to give 20% tip on a $30 bill.

There you go guys. It’s very easy and simple. If you want to learn more, you can download this very helpful guide by Seiko on how to use rotary slide rules on a watch (Click HERE to download).

It’s very important for you guys to have a basic understanding of the calculations so that you’ll already have rough idea of the answer. Slide rule can be very confusing, and it’s very easy to get use it wrongly.

Having knowledge on the calculation and a good grasp of numbers (especially the 10s, 100s etc.) will really help to make its usage faster and correct.

A Citizen Blue Angels AT8020-03L with slide rule. The difference with the watch’s slide rule is both scales are located inside the dial, and not on the bezel. So a separate crown (at 8 o’clock) is used to rotate it.

For those that are very interested in slide rules and how to use them (the actual ruler), you can check out this awesome site which gives huge amount of info on how to use the ruler

For a very cool virtual slide rule, check out this page -> Antiquark.com

Slide rules are the thing in the past and has been replaced by modern calculators. But there is something unique about this device that’s so cool about that.

In my opinion, it’s as cool as automatic watches – both are “antiquated” by today’s technology, but have some very unique characteristics to them.

But still, for work purposes I’d strongly suggest to use calculators to avoid any wrong calculations which can be costly to make =)

Hope you guys have learn a lot about slide rule history and invention. But the most important thing is you guys now know how to use slide rule on a watch bezel. Let me know if you have any questions.

Drop your comments below and subscribe for awesome stuffs in future =)

11 thoughts on “Slide Rule On Watch Bezel : For Watch Fans Who Love Their Maths!”