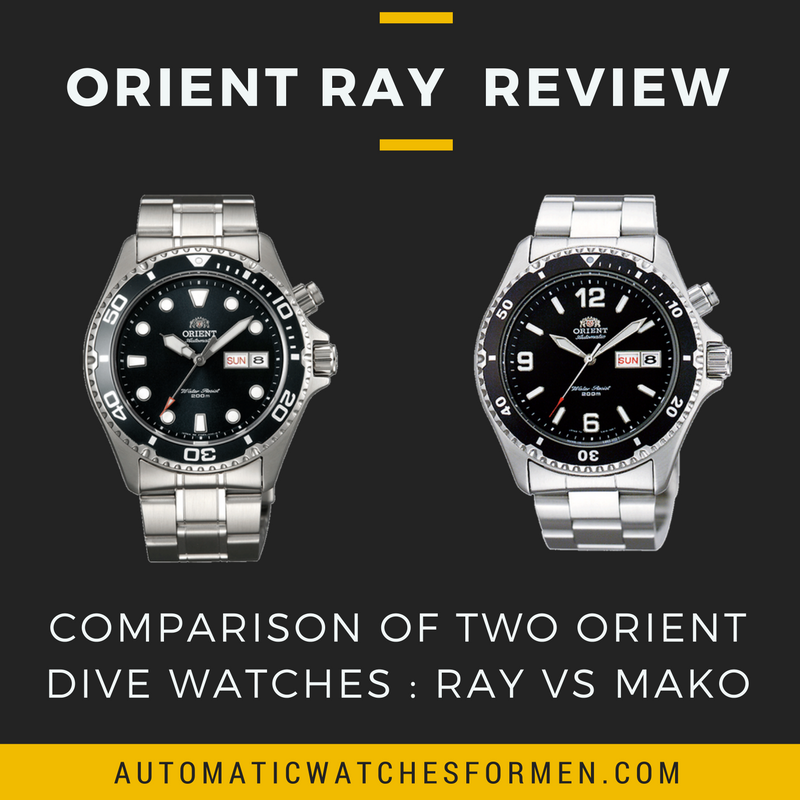 In this post, i’m going to write about Orient Ray review. After the success of their Mako automatic dive watch, Orient follow up to that with their Ray automatic dive watch line which is basically a redesign of the Mako. Both of these are hugely popular among Orient’s fans – you can see many debate of Mako Vs Ray in watch forums with no conclusion.

Both are actually the same watch (movement and casing are the same) but with major difference in their design. We are going to cover the differences between the Ray vs Mako, but before that, let’s have go through Orient Ray review.

The Orient Ray is a beautiful looking watch that has all the classic submariner look – big markers, big hands, and big bezel with minute markings. All about this watch is to make it look like a true dive watch. It is one of the striking difference with the Mako.

The Orient Ray has a 41.5 mm diameter which is perfect for most guy’s wrist. It has a 46 mm lug to lug width, not too long and should stay right your wrist. A bit thick at 13 mm but that’s to be expected for any dive watch. Overall, the watch is designed with perfect proportion and not too big which I really like.

There are 3 variation of the dial: black matte, orange matter and blue metallic dials. All three are actually the same as the Mako with the exception of the blue metallic – the Mako has a matte blue dial variation. On the dial are the Orient logo, “Automatic, “Water Resist” and “200m” signatures. Just like the Mako, Orient chooses to keep the signatures on the Ray to minimum.

The markers of the Orient Ray is a combination of circle markers and index markers at 6, 9 and 12 o’clock. The markers are big and easy to read which is one of the main features that a dive watch should have.

It’s a standard design of many dive watches nowadays which have taken the cue from Rolex Submariner. Lume are generously applied on the markers to give extra visibility in low light condition.

The hands of the Orient Ray are sword shaped hands with lume applied on it too. The hands are big and bold, which will give ample of space to put lots of lume on it. The second hand is silver stainless steel. Lume is applied on the tip with red linings. There are also silver borders around the day and date display. These are the details that Orient have put on the Ray which I really like about.

The watch has an 60-clicks unidirectional rotating bezel. The low click count of the bezel is something that does not go well with some people, but you have to remember that this watch is a low end mechanical piece and it will have some flaws so that Orient can keep the price down.

On top of the bezel is minute markers which is bigger than what you can see on the Mako. Legibility is an important aspect of any dive watch. Truly, the Orient Ray is more of a dive watch than its older brother Mako.

Orient Ray With Date Change Pusher For An Unsymmetrical Design

Just like the Mako, Ray also has the pusher at 2 o’clock to change the date. This is due to the old movement that it has though (the new Mako II and Ray II has an updated Cal. F6922 movement that eliminates the pusher). It’s a disadvantage of the movement of course, but the pusher gives the Ray a unique unsymmetrical design that no other watch has.

Even Orient advises that the watch to be used only for skin diving i.e only for snorkeling etc and definitely for deep dives. For a cheap ISO certified dive watch, I would recommend that you check out Seiko SKX007, a tried and tested dive watch that is very popular with divers around the world.

Like the Mako, the Ray is powered by the Cal. 46943 which is a very trusted movement. It has been used for a long time in most of Orient’s affordable automatic watches.

The Cal. 46943 has 21 jewels and vibrates at 21600 vibrations per hour or 6 beats per second. It also has a 40 hours power reserve. Accuracy wise, it is accurate up to +-10-15 seconds per day. It is non-hacking (the second hand will not stop when you want to set the time) and cannot be manually wind.

Not being able to hack the movement is not a big deal for me. But to not being able to manual wind is something else. I really prefer a watch that can be manually wind to keep it running so that I don’t have to reset the time when the watch drop dead when I’m not wearing them.

Not being able to manually wind the watch will leave me with no choice but to use a watch winder, which something that I would only reserve for my most expensive watch and definitely not for the Orient Ray.

Just like the Mako, the Ray also is produced with 3 different dial colors: Black, Blue and Orange. The pepsi bezel of the Mako line is not reproduced in the Ray though. Instead Orient released a black PVD case version of the Ray (which really looks cool!). Check out these 4 variation of the Orient Ray below:

Below are the pros and cons of the Orient Ray Automatic Dive Watch:

1- A beautiful dive watch with traditional looks
2- Day and date displays are very useful features
3- Unsymmetrical design due to the pusher at 2 o’clock makes the watch looks very different than other diver’s watch (e.g Seiko SKX007, Invicta Pro Diver, Rolex Submariner, etc)
4- Orient Cal. 46943 movement has been used for decades and has a very good track record as a beater movement with good accuracy and robust performance
5- Affordable price makes it a very good first watch for those starting out with automatic watches

I’ve summarized the difference between the Orient Ray and Mako below for your easy reference. As I’ve mentioned earlier, the Ray and Mako are basically the same watch (case, movement). What sets them apart are the dial design and bezel.

Orient Ray looks more sporty with the dial and bezel of a traditional dive watch. The Mako has a dressier look with the numeral markers and small minute markings on the bezel.

Orient Ray (left) side by side with its older brother, the Orient Mako (right)

I can’t say the same for you but for me, I like the Mako more. The design of the Ray is just like any other dive watch out and there is no sense of character in them, to be honest. The Mako is a bit different and stylish. Again, this is just my opinion. Feel free to state your preference of the two in the comment section below. I would love to hear what you guys think =)

Orient Ray automatic dive watch is a beautiful and affordable dive watch by the Japanese watchmaker. It has the traditional dive watch look and a unique unsymmetrical design. It’s not an ISO certified dive watch, but then let’s be honest: how many of us actually deep dive? If you are only desk diving (like me lol), then this is one the watch that you have to check out.

I hope you guys enjoy this Orient ray review and comparison with Mako. If there’s any question, feel free to drop it down below. Till next time then.

Looking To Buy The Orient Ray?

The Ray is a bit hard to be found as it’s an old model. Orient seems to favor the newer (and pricier) Ray II models currently. Fortunately Amazon and Ebay have them in their listings. Below, I’ve listed the cheapest sellers on Amazon and Ebay for the variations of the Orient Ray. Simply click the links below to go to the sellers page:

You might also want to check out these affordable diver watches: