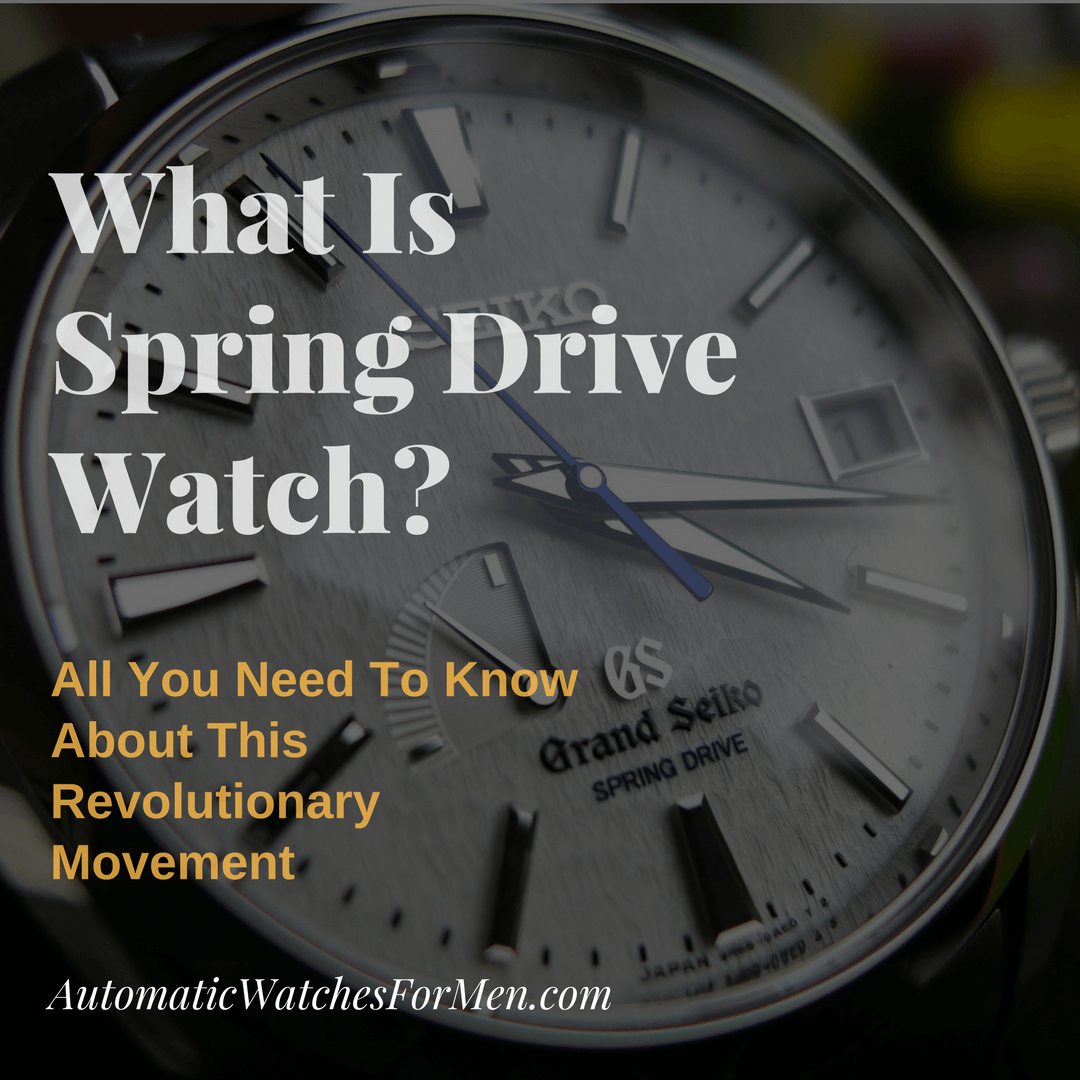 Somewhere along this horology hobby, you’ll be sure to hear about this “Spring Drive” thing from Seiko which purportedly is a something truly unique and on its own realm.

In my honest opinion, yes, it truly is.

Just like quartz watches, Seiko just seems to innovate and create great things one after another – and spring drive watch is one of the extraordinary creation in the horological world in recent times.

So what actually is spring drive watch?

To be precise, spring drive  refers to a new movement created by Seiko which combines elements from automatic and quartz movements.

It’s powered by mechanical energy stored in its mainspring, like any automatic watch.

Where they differs is at the timekeeping part i.e the thing that ensure the clock is running at the correct speed.

Automatic watch keep its time by an escapement and balance wheel mechanism.

The problem with this method is it’s not really accurate, with even the most accurate automatic watch (chronometers) can be accurate up to 5 seconds per day.

This means a normal automatic watch will gain or lose a few seconds a day (though I should note that this varies from watch to watch).

Spring drive seeks to replace this with a new type of movement. It uses a tri-synchro regulator, a combination of mechanical parts with the technology of quartz for precise timekeeping, with an added blend of electromagnetic.

(Don’t worry if you don’t get it. I’ll explain these in detail later on).

The result is a movement with the uniqueness of automatic watch in its energy generation and storage, while at the same time having a quartz-like accuracy. In short, spring drive is an evolution of the normal automatic watch!

Spring drive is the creation of a Japanese Seiko engineer, Mr. Yoshikazu Akahane who sought to improve the automatic watch’s accuracy.

At that point of time, around 1977, Seiko had released its first quartz watch which took the world by storm.

He wanted an improved automatic watch that can go toe-to-toe with quartz in terms of accuracy and reliability.

Only after about 30 years later did the first spring drive watch was released on 2005. That’s really a huge amount of work… But the end result speaks for itself =)

How Does Spring Drive Watch Works?

Now for the technical part, how actually does spring drive watch work? Its mechanism of an automatic watch movement can be broken down into 4 major elements:

Now let’s go into the detail of each elements!

The source of energy for spring drive watch is the mainspring, which is the same with automatic watch.

This is one of the main things that separate these two movements with quartz watch.

It is well known that quartz watch uses a battery to operate which is also one of its main disadvantage: battery cells need to be replaced and often times, you can be caught with a dead battery without any warning.

The mainspring, on the other hand, works by the principle of potential energy stored by a winded up spring.

It’s a long striped of steel that’s rolled tightly in a case/barrel. When its tightly winded, it will try to unwound itself – this is what gives the energy to the watch.

Spring drive watches can be automatic or manual winded. This means the mainspring can be automatically winded via a rotor that’s freely moving when we’re wearing the watch.

The rotor is a half-circular weight which can be seen from an exhibition caseback. This mechanism is exactly the same as the one in all automatic watches.

Shown above is an example of the rotor on a spring drive watch. The semi circular steel will rotate freely even with the slightest movement to wind the mainspring

There are also spring drive watches without this self-winding rotor – these are manually winded by rotating the crown.

The mainspring is very important for the power reserve of spring drive watch (and any automatic/mechanical watch).

Usually, a normal automatic watch can has a 40 hours power reserve, which is the norm for affordable ETA movements as well as other Japanese movements (Seiko, Orient, Citizen, etc.).

But Seiko also invented a higher elasticity mainspring made from their proprietary SPRON510 alloy which can give a 72 hours power reserve.

Since the SPRON510 is normally used for more expensive watch, it’s almost a given for all spring drive watch to be equipped with them.

I should also add that some watches can have an extended power reserve. In the case of Seiko spring drive, its 9R01 caliber is known to have a gigantic 192 hours or 8 days power reserve =)

The mainspring barrel is connected to a set of gears which form the transmission line of the watch.

The purpose is to transfer the mainspring’s potential energy throughout the whole movement via the gears.

It’s just like a car transmission if you ask me and is fairly typical for any normal watch.

This is the heart of the spring drive watch that separates it from other watch movements.

The transmission will in the end rotates a glide wheel that has a fixed magnet at its center.

The magnet is positioned inside a steel wire encasement that’s wired to an Integrated Circuit (IC) with a quartz oscillator.

When the glide wheel is rotating swiftly, the movement of the magnet inside the steel setup generates electricity (it’s something like dynamo or any generator).

This electric current is then supplied to the IC and the quartz oscillator.

What’s the use of the IC and quartz oscillator?

The IC and quartz oscillator is used to regulate the speed of the glide wheel (and subsequently the entire watch timekeeping).

Quartz has a piezoelectric nature, which means it will vibrate when supplied with electricity (and vice versa).

The vibration or oscillation is 32768 Hz (or 32768 times in one second) and that count is used by the IC to compare to the glide wheel frequency.

If the glide wheel is a bit fast, the IC will trigger an electromagnetic force which acts as brake to slow down its rotation (and vice versa to speed it up).

Lastly, the time indicator of the watch consists of hands that are connected to the various wheels corresponding to the time measurement intended.

This part is typical for about all watches nowadays, though some hi-tech chronograph watches can use motors to move its hands.

Spring drive features quite a number of advantages compared to traditional automatic and quartz watches. Below are its main advantages:

This is one of its main advantage: a watch with mechanical parts but still has a very high accuracy like a quartz watch.

The usage of tri-sychro regulator that set the watch based on quartz’s oscillation feedback means the spring drive has almost quartz-like accuracy.

Theoretically the spring drive is a bit less accurate than quartz. This is due to the movement that’s not directly connected to the quartz crystal, but instead uses the frequency to adjust the glide wheel speed.

This is an additional room of inaccuracy for the watch, which is why Seiko rated the spring drive to +- 1 second per day accuracy.

As comparison, a typical quartz watch is much more accurate at +-10 seconds per month.

Even though that’s the case, we need to take into consideration that the spring drive is a high-end movement by Seiko and they will only use the best materials in it, including the finest quartz crystal.

This means that in real life, the spring drive can has a much better accuracy than any normal quartz watch – and that’s exactly the case based on testimonials from its owners!

Another great aspect about the spring drive is its genuine sweeping second hand. Sweeping second hand is unique only to automatic watch but in reality, the hand is ticking at a fast rate e.g 6 or 8 beats/times per second.

There are also hi-beat movements with up 16 beats per second, but those are much more expensive.

Spring drive use of the tri-sychro regulator that uses electromagnetic braking to speed up or slow down the watch means the transmission is never stopped in its track, but is continuously moving all the time.

The result is a very fluid and the first genuine sweeping second hand in the world. And have I mentioned how mesmerizing it is?


Watch how majestic the second hand on this spring drive watch moves. Beautiful!

3- No need for battery change

Like the automatic watch, spring drive watch does not need a battery to operate. The self-winding mechanism is sufficient for it to function properly. No more sudden dead battery at the worst times with it LOL!

Generally, spring drive watches are being sold for no less than $5,000 though you can get one for less than that online.

Generally, I’d recommend you guys to buy watches online since it’s always cheaper. But not in the case of the spring drive.

For that kind of money, I’d suggest for you guys to take the safest approach in obtaining one, that is to get it from an authorized dealer and make sure you get all the certifications and warranty of it.

It’s very important because if your watch has flaws or you get a lemon, you’ll still be in the safe side and can claim warranty =)

Spring drive is one of best innovation in the history of modern watchmaking.

It’s marriage between the complexity and passion of automatic movement with the superior accuracy of quartz crystal makes it something truly unique and beautiful.

Above: The Seiko Spring Drive “Spacewalk”

Some people say it’s not a true automatic watch, to which I agree. It’s indeed not a real automatic watch, but instead, it’s a hybrid movement that deserve a place of its own, just like solar and kinetic watches.

And gosh, that sweeping second hand is very beautiful!

Hope you guys enjoy this introductory article on what spring drive is all about. Let me know what you guys think about this breakthrough movement from Seiko.

I’d really love to hear what you guys think =)

4 thoughts on “What Is Spring Drive Watch? All You Need To Know About This Revolutionary Movement”