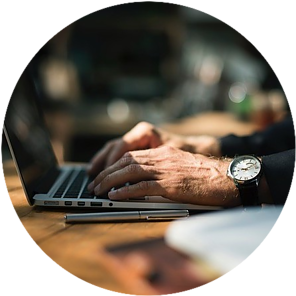 I still remember when I got my watch as a kid, I’m not entirely sure how to wear it. I know how to strap it on my wrist but then which wrist should I wear it on? It was only after few years (and some more watches) that I can say how best to wear a watch is.

There are a lot of benefits in wearing your watch on your non-dominant hand as it’s basically the best way to achieve greater comfort-ability and operability in your daily lives. The watch industry knows this and this is the reason why watches are traditionally designed to be worn on the left. Of course, there’s nothing wrong if anyone wants to wear their watches on the right.

It’s a fact that we will use our dominant hand the most for complex and stuffs that require precision such as writing, painting, woodwork etc. Our dominant hand is the one that we have most control about and is usually the one we used the most.

Because of this, wearing watch on the non-dominant hand is most beneficial as you can easily tell time without stopping what you’re doing with your right/dominant hand. But if you wear your watch on your dominant hand, you will need to stop whatever you’re doing just to tell time – which is not really effective.

Thus, wearing your watch on your non-dominant hand is the best for those wanting efficiency in their lives. All that’s needed then is a flick on your left wrist and you can still tell time without stopping your work

Wearing a watch will put on some weight on our hand and this is one of the reason why most people chose to wear it on their non-dominant hand. Your right hand is already occupied with tons of things to do and the last thing that you want is another few hundred grams of weight on it. Although a watch does not weight much but it will definitely affect your wrist movement.

One thing that I wants to highlight is the weight of a watch heavily dependent on what material is used to make it. For example, a watch made from stainless steel can add a substantial weight to your wrist (automatic watches, for instance, is almost always heavier than other types of watches due to this).

This is not the case with plastic based watches (such as most quartz-sports watches, fitness trackers, smartwatches) where it can be very light thanks to lightweight materials used such as plastic, silicon, rubber etc.

3) Easier to do work with dominant hand

For me, I personally feel more liberated if my dominant hand is free of anything i.e watches, bracelet, etc. I’m a right-handed guy and use my right hand by default for almost everything in my life. Because of this, I don’t feel comfortable having anything strapped on my right hand as it will obstruct its movement.

This is particularly the case with doing things such as writing, taking notes, using computer mouse, drawing and other things that require my right hand to be placed near a surface/table. Wearing a watch on my right hand will obstruct its movement so much so my productivity will be reduced. In this case, it’s much better to wear my watch on my left hand instead.

4) Avoid damaging on the watch

In addition to the functionality of wearing a watch on the non-dominant hand, this practice can also help to avoid damage on the watch. For example, the dominant hand will usually be used for doing heavy stuffs such as lifting things, chopping wood, repairing machines etc.

Such activities pose more danger of damaging the watch should it is worn on the dominant hand.

Now, I’m not saying that your watch won’t get damaged if you wear it on your non-dominant hand (I’ve personally scratched my watches even though I’m wearing it on my left wrist LOL!) but at least, you will be able to avoid or reduce the risk of it being damaged by doing so.

Another thing to remember is that sometimes a damage to the watch is not just it being crushed to the point it cannot be used. You can always pick up some damages like scratches on the watch surface and crystal mostly from brushing the watch with hard things like steel, concrete or a rock.

While these type of exterior damages are not that severe, it is going to make your watch looks not as beautiful as it originally is, not to mention the heartache associated – for example, I’m always in agony when I look at my $500 Seiko Sumo covered in scratches because I didn’t take good care of it!

Most Watches Are Designed To Be Worn On The Left Wrist

As most people wear their watches on their left hands, this fact was picked up by the watch industry and the design of watches were corresponding to this. For instance, we can find that almost all watches have crowns located on their right side of the watch. Without a doubt, this was designed so that right-handed people (which consists of the majority of people) can operate the crown easily to change its time/day/date.

In addition to this, the pushers are also traditionally put on the right side. As these pushers are used to operate the chronographs or set the watch, it’s important to place it where it will be easily accessible i.e the right side of the watch (at least for most of us right-handed guys!).

We can see even current smartwatch designs seem to follow this concept as most of their interact able physical buttons are on the right side of the watch. Granted, you can use the touchscreen on the smartwatch to operate it but it will not have the same operability as the physical buttons.

Can You Wear Your Watch On The Right Wrist? Definitely!

This is definitely the case with left-handed people as they will not prefer to wear their watches on their dominant hand. In this instance, it’s actually better for them to wear it on their right hand as it will make them easier to do things with their dominant left hands.

But as I’ve mentioned above, most watches are designed to be worn on the left wrist so there’s little choice for those wanting a right-handed watch AND is operatable easily. There are some watch companies that produce left-handed centric watches but it’s too far in between.

If you will only use your watch to tell time and don’t usually need to operate it (i.e a chronograph, etc.), then wearing a typical watch on your right wrist is going to be just fine. But if you wants to use your chronographs often, then it’s better to wear it on your left hand or get a left-handed centric watch should you wants to wear it on your right wrist.

Man vs Woman: Any Difference On Which Hand To Wear The Watch?

There are also some man and woman who wear their watches on their right hand, but these are mostly left-handed people so such a thing is better for them.

But in terms of this gender-specific rule of using a watch, it’s basically a misconception and you should not think too much about it. Just wear the watch on your non-dominant hand and you will be okay (see the 4 benefits of doing so) or you can just follow your preference. Either way, I believe that you should always wear your watch in a way that’s most comfortable and preferable to you.

Hope this article will help you to decide what wrist you should wear your watch on. Although wearing the watch on the non-dominant hand (the left wrist for most of us) is the best, you can always wear it on your dominant hand depending on your preference. After all, you paid for it and you should enjoy your watches as you like it.

Do share your thoughts in this matter by commenting below.

4 thoughts on “Which Wrist Should You Wear Your Watch On?”