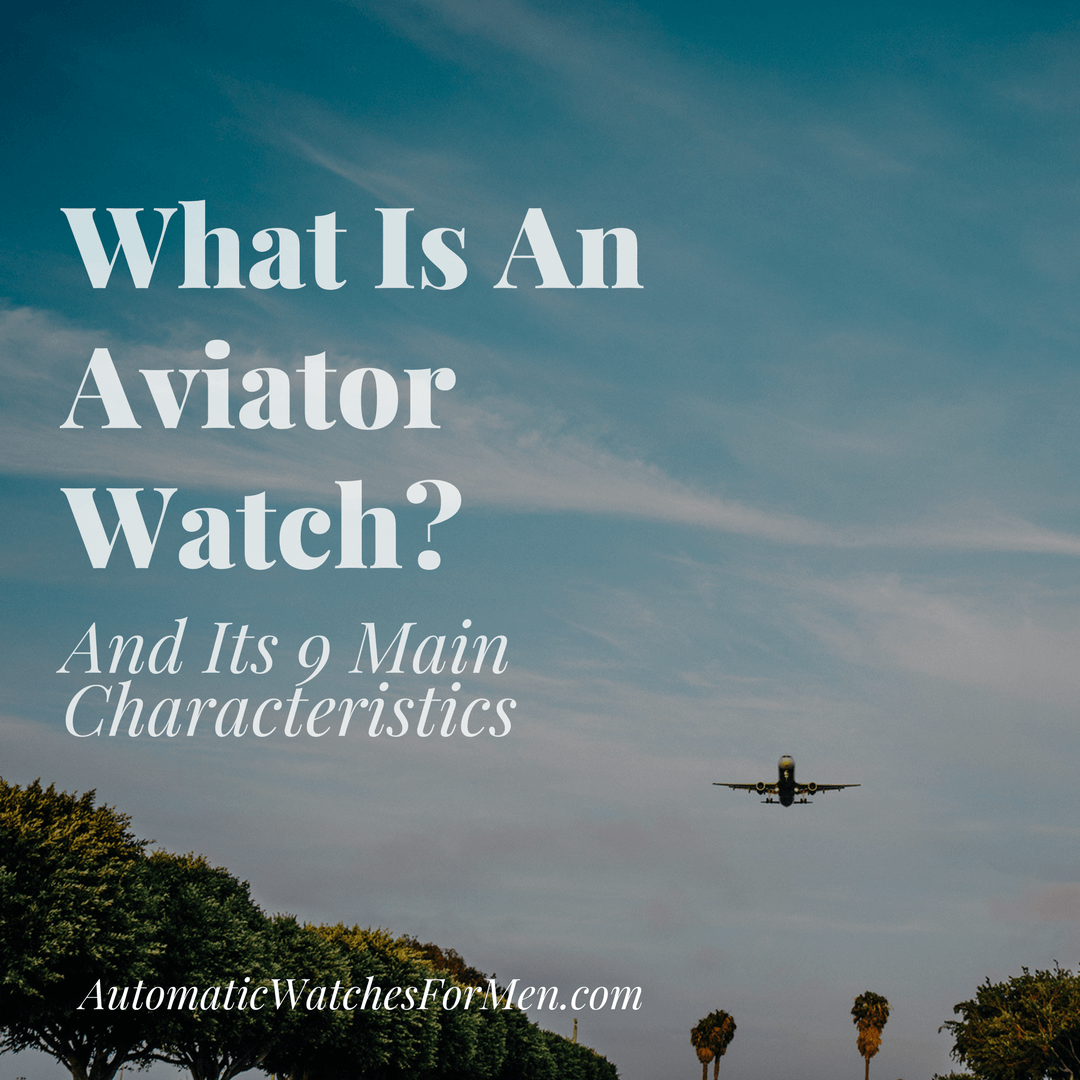 Since the start of aviation at the beginning of last century, it’s not just airplanes that begin to take off. Another thing also began to gain fame, and that is the aviator watch (or aviation/pilot watch).

So what is an aviator watch?

It’s quite simply a watch that pilot uses but that’s not just the case anymore. Just like dive watches and military watches, pilot watches are also used by the normal non-pilot masses.

In this article, I’m going to unravel what is an aviator watch, it’s history, it’s characteristics and prominent brands of this particular segment in the family of modern wrist watches.

It is commonly agreed that the first aviator watch is the Cartier Santos. As all of you might have known, this is a watch from Cartier, the watch and jewelry maker from Paris.

But what is the story about the Cartier Santos? What’s Santos?

The Santos in the watch’s name is after Alberto Santos-Dumont, a Brazilian aeronautical inventor that’s contributed greatly to the development of hot air balloons, airships (or dirigible balloon) and airplanes.

He was borned in Brazil but spent many years of his adult life in Paris researching and inventing aircrafts.

His Airship “No. 6” won the prestigious Deutsch de la Meurthe prize in 1901

He won the Deutsch de la Meurthe prize, a competition for the first machine capable of flying return trip between Parc Saint Cloud and Eiffel Tower in less than 30 minutes using his No.6 Airship.

Winning the competition marked a very important milestone in aviation history as at last, the first fully functional airship had been invented.

He then went on to create heavier-than-air crafts (or simply the modern airplanes), the first invention of such kind in Europe

(though it has to be noted that the Wright brothers had already invented their own flying machine in the US at that time).

The story of the first aviator watch began when Santos-Dumont complained to his friend, Louis Cartier about the difficulty of using pocket watches while flying.

He had to keep both hands on the steering wheel or had to check lots of things while in flight and pocket watches are just too hard to use.

It’s akin to smartphones nowadays in which we had to open it and unlock it to see time. And for an aviator, that moment of carelessness could be very dangerous.

Thus, the idea of making an aviator watch that’s strapped to the wrist came from this conversation.

Cartier would then named the watch Cartier Santos, as commemoration of Santos-Dumont’s achievements (it also worked as great publicity as he was very famous at that time).

Till today, the Cartier Santos is still famous not just for its historical background but also its unique square case shape.

If we looked at the history of aviator watch as well as other types of watches such as dive watch and military watch, we can see a similarity between them.

It all spawned from the requirement of these professions (aviators/pilots, divers and army men). All of them need a way to tell time efficiently and a wrist watch was and still is the best way to do that.

9 Characteristics Of An Aviator Watch

So what makes an aviator watch? As compared to diver’s watch, aviator watches don’t have a specific attribute. It’s form and design can vary greatly from one model to another.

The main binding element is the watch must be able to help the pilot in his job.

But as you guys will see later on, this greatly depends on the pilot’s requirement which in turn makes their look very different from one to the other.

Perhaps the best known feature of aviator watch is the easy to read dial thanks to its oversize hands and markers.

As compared to diver’s watches, aviator watches usually use full numeral markers instead of index markers as it’s easier to read time – though this is not a hard rule among all aviator watches.

One of the important pieces in aviator watch history is the Zenith Louis Bleriot.

Louis Bleriot was the first man to fly across the English Channel in 1909, shortly after the success of the Wright brothers and Santos.

And just like Santos, he also had his own favorite watch which is the Zenith aviator watch from the Swiss watchmaker.

While the Cartier Santos was every bit unique, the Zenith design is still favorable until today, save for some minor changes.

The black dial with oversize numeral markers on a stainless steel case still looks great even in today’s modern age (after more than 100 years mind you).

It’s truly fascinating how a watch can had such evergreen design and withstand time.

It’s impossible to not mention about B-Uhr watches in an aviator watch article. B-Uhr is an acronym for Beobachtungsuhr, Germany for Observer’s Watch. For some, these types of watches are also known as Flieger.

These watches are the ones designed to be used by German bomber pilots during WWII, so yeah, they have quite an ominous history if you ask me.

There are 2 types of B-Uhr, type A which is a more normal wrist watch and the more famous type B with its swapped minute and hour marking position.

There were only 5 manufacturers of the B-Uhrs for the German: A. Lange & Söhne, Laco (Lacher & Co), Stowa (Walter Storz), Wempe (Chronometerwerke Hamburg) and IWC.

I can say the B-Uhr were the ones that define the current form of aviator watches nowadays, so much so many watchmakers try to mimic it’s design.

With its simple and easy to read dial, it’s not hard to see why its a fan favorite.

Even Hamilton has their own B-Uhr watch, the Hamilton Khaki Pilot Automatic above

Another important feature of an aviator watch is having an anti-magnetic case. Airplane cockpits are filled with instruments that can emit strong electromagnetic.

Thus, it is very important for the pilot’s watch to have a good anti-magnetic case to ensure its movement is working precisely.

Aviator watch also needs higher than average accuracy in its timekeeping. Prior to quartz watch invention, chronometers are the favorite choice for aviator watches for their higher accuracy compared to normal automatic watches.

I don’t think I need to elaborate more on this. Air crafts will be subjected to high G-force while taking off so it’s very important for the watch to has good impact resistance built into it.

Apart from the above typical forms and features, aviator watches also usually have at least (or none) of these complications and functionalities. Again, these were born from the needs of pilots for quick on-the-fly aviation calculations.

The Longines Lindbergh Hour Angle watch is a cool looking watch, but those rotating bezel in unlike what we’ll ever see today.

So what’s it used for?

The watch was designed as a navigational tool for aviators by Charles Lindbergh, the first man to fly non-stop crossing the Atlantic from New York to Paris.

As you might have known, celestial observations means figuring the position of stars, sun, etc. and using them to find your location on earth.

This technique has been used for centuries of seafaring. This was way back before the invention of GPS.

But aviator/pilot can’t afford to do the traditional way of using sextant as it will take both hands of the steering, which is very risky.

As such, the Hour Angle watch seeks to simplify this by putting the necessary information on the watch itself and can be operated by one hand.

(for more in-depth history of the Longines Lindbergh Hour Angle watch and the technicality behind it, read this amazing piece by Hodinkee site)

Chronograph or stopwatch is one of the complications usually found in an aviator watch. It’s meant to be used to track time for various events during the flight.

Just like how divers use the unidirectional rotating bezel to keep track of their diving time, pilots use the chronograph for this purpose too.

Some aviator watch also has tachymeter scale on top of the watch bezel that can be used to quickly calculate the speed of the aircraft while used in conjuction with the chronograph.

Plus, the extra subdials make the watch busier and cooler LOL!

Like the Longines Lindbergh Hour Angle watch, slide rule is also frequently used on top of an aviator watch bezel.

I’ve written in-depth about this device (click here to read my article on slide rule) and found it to be a tool with various capabilities that will make our life easier.

Though the only downside is the learning curve can be a bit steep. Apart from that, it also gives a very cool  sophisticated look on any watch =)

Last but not least, the GMT watch function. The GMT function is quite simply a function to show another timezone on the watch, in the case of pilots the GMT (Greenwich Meridien Time) or also known as UTC (Coordinated Universal Time) and Zulu time.

These are the time at London where the timezone is UTC+0. Aviation industry use this as the basis for their communication since there are many flights coming from different timezones. This is intended to avoid any confusion from these flights.

Usually the GMT hand will be unique and different from the other hands and will complete one rotation of the watch in 24 hours as compared to normal hour hand that makes it every 12 hours.

Other than GMT time, it can also be set to different timezones which is more useful for non-pilots that frequently travel and want to keep track of his/her home time.

Aviator watch has a deep history and significance in our current civilization. The invention of aircraft had revolutionized the way we travel and these watches played a huge role in it.

While pilot nowadays don’t usually rely on their wristwatches for navigation anymore (such as the Longines Hour Angle) as these functions can be done by the highly accurate instruments in the aircraft cockpit.

Even then, aviator watches are still a must especially for the careful pilot because, well, you never know if those instruments will broke down mid-flight.

And that’s one of the reason why I (and many other men) love aviator watches – those features are not just for show. It’s very much useful and functional.

And lastly, you guys surely can’t deny that these aviator watches are cool as hell right =)

I hope you guys enjoy this post regarding what is an aviator watch and its characteristics. Let me know if you guys have any questions or comments or there is any characteristics that I’ve missed.

I’d love to hear your feedback =)